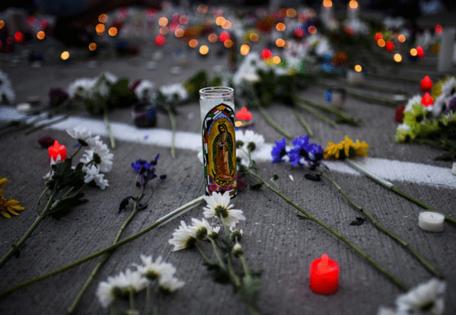 MINNEAPOLIS — Several pieces of gun evidence were recovered from in and around the vehicle Winston Boogie Smith Jr. was sitting in when he was fatally shot by members of a federal task force earlier this month, according to newly filed court documents.

A Smith and Wesson M & P 380 pistol was also recovered from the driver's side of the vehicle, one affidavit said.

Six casings matching the pistol were found inside the vehicle: Two from the driver's seat, one from the floor nearby, two from the center console and one from the front passenger area, court documents said.

Attorneys for the woman who was in the car with Winston when he was killed June 3 said last week that she never saw him with a weapon.

The Minnesota Bureau of Criminal Apprehension (BCA) has said that Smith fired a weapon from inside the car.

Smith, 32, and the woman had left Stella's Fish Cafe in Uptown when members of a U.S. Marshals Service fugitive task force approached him in a parked car on the fifth floor of a parking garage across the street in the 1400 block of W. Lake St. Authorities have said Smith was wanted on a warrant for being a felon in possession of a gun.

The events that followed, which were not captured on video because the officers were not using body cameras or dash cameras, remain murky. The BCA, which is investigating the shooting, has not said who fired first, but said Smith fired a gun from inside the vehicle.

The new court documents were equally vague, stating, "At some point during the interaction, shots were fired."

A handgun and spent cartridge cases were found inside the driver's area, the BCA said soon after the incident.

The search warrant affidavits didn't provide any clarity about the circumstances. They showed that at least 14 casings and one gun cartridge matching Luger pistols were found outside the car.