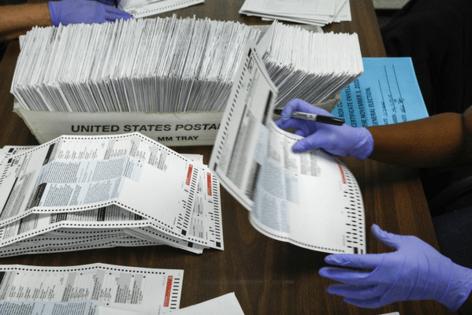 Now Republicans in the N.C. General Assembly want to stop similar situations from happening in the future, by requiring elections officials to stop collecting mail-in ballots after Election Day. That would be a significant change from the current law — which for years has allowed a three-day grace period for mail-in ballots to arrive after the election and be counted, as long as they were postmarked on or before Election Day.

Just less than half of U.S. states have an extended deadline, while a little more than half have the Election Day deadline Republicans want for North Carolina.

“What could make more sense than making Election Day the voting deadline?” asked Sen. Warren Daniel, a Republican from Morganton who sponsored the bill.

The push comes after Republican President Donald Trump said in 2020 that whoever is ahead on election night should be declared the winner, even if not all votes have been counted. Daniel said having a wait between election night and the results being announced causes distrust because some people think there’s a conspiracy going on.

“Distrust in an election process can be just as damaging” as fraud, he said, adding: “Everyone saw how long it took North Carolina to declare winners in the presidential election and U.S. Senate election.”

Trump questioned the election results in some states with extended deadlines where he lost, but not in North Carolina, where he won. On Wednesday night, during the debate on the bill, Democratic Sen. Toby Fitch of Wilson asked Daniel if he thought Trump really won the election and should have been sworn in in January.

After that the debate broke down into squabbling between the two parties about whose leaders are more responsible for conspiracy theories about voting irregularities, before Senate leader Phil Berger stepped in to stop it, asking them to stay focused on the bill.