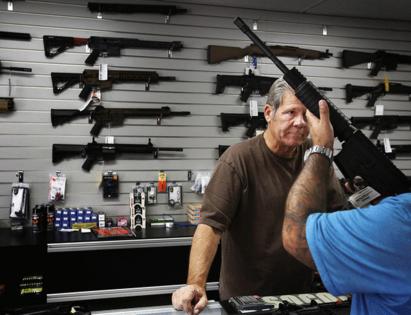 SAN JOSE, Calif. — Less than a month after the deadliest mass shooting in San Francisco Bay Area history, San Jose leaders passed a new gun law that requires retailers to video-record all firearm purchases, becoming the largest city in California and one of the first major cities in America to do so.

The new ordinance, unanimously approved by the City Council on Tuesday night, aims to deter an illegal practice known as straw purchasing, in which someone buys a gun for another person such as a felon or minor who is barred from owning firearms.

"We know a significant number of crooks and gangs get firearms through straw purchasing," Mayor Sam Liccardo said. "This set of ordinances is really focused on narrowing the flow of guns to those which are clearly legal and hopefully doing something to deter the flow of guns that are unlawful to own."

The new law is just one part of a comprehensive 10-point gun control plan that Liccardo unveiled last week in the wake of the mass shooting in late May at a San Jose rail yard. A disgruntled Valley Transportation Authority employee fatally shot nine of his co-workers and then himself, according to police.

The mayor's plan also calls for a separate ordinance that would require gun owners to carry liability insurance and pay a fee to cover taxpayer costs associated with firearm violence. The council is expected to consider that proposal this fall.

Liccardo first announced in February 2019 that he wanted to make changes to the city's gun safety ordinance, including mandating that retailers video-record firearm purchases. He said the adoption of the video recording regulation was delayed, in part, due to the pandemic.

Liccardo said he is "trying to lead an effort to bring other cities and hopefully the state along" in adopting similar legislation.

The organization added that it "will not hesitate" to challenge the city's policies in federal court and "take every possible action to block their enforcement."