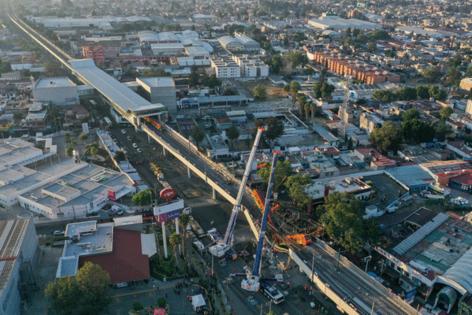 The tragic late-night collapse that plunged a train from an elevated track into traffic below was due to poor or unfinished welding, lack of bolts in some beams and the mixing of different types of concrete in the structure, according to the report conducted by Norwegian firm DNV. The report is preliminary, according to El Financiero, which said it obtained a copy.

The report’s focus on construction failures throws billionaire Carlos Slim’s Grupo Carso SAB in the spotlight because it built the portion of the Line 12 metro that collapsed, raising questions about the future of the company’s dealings with the government.

Foreign Affairs Minister Marcelo Ebrard, who was mayor at the time of the metro line’s inauguration in 2012, and current Mayor Claudia Sheinbaum have also come under scrutiny amid media reports that the construction was rushed or maintenance had failed. Maintenance matters aren’t raised in the government-commissioned report, according to El Financiero.

Sheinbaum is scheduled to release the official report later on Wednesday.

Some of the report’s findings are similar to those mentioned in a New York Times investigation, such as a detail that ceramic rings used around studs during installation in the concrete slabs hadn’t been removed.

At his daily news briefing on Wednesday, President Andres Manuel Lopez Obrador criticized the story by The New York Times, which said the metro’s construction may have been rushed because Ebrard sought to open the metro before his mayoral term ended in 2012. Lopez Obrador said the report “lacked ethics.” Both Ebrard and Sheinbaum are seen as early contenders for the 2024 presidential elections.

“There will be punishment for those responsible, whoever is responsible,” the president said.