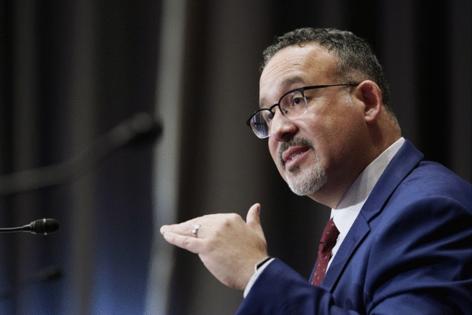 Education Secretary Miguel Cardona tried to sell the administration’s proposed 40% increase in education spending, to $102.8 billion next fiscal year, as well as programs from the administration’s infrastructure and jobs proposals. He argued the increased investments would help close long-term equity gaps in education as well as help recovery from learning losses caused by the coronavirus pandemic.

“With the budget proposal, the American Families Plan is a transformational opportunity for our country, to not only recover from the pandemic, but to be better than we ever were before in education,” Cardona told members of the Labor, Health and Human Services, Education, and Related Agencies Subcommittee.

The lion’s share of the department budget would go toward a $20 billion increase in the Title I program, which provides a sliding scale of funding programs for schools based on their percentage of low-income students. However, the budget also includes elements from the administration’s infrastructure and economic development proposals, such as making the first two years of community college free.

That prompted objections from Democratic West Virginia Sen. Joe Manchin III and Republicans on the panel. Manchin argued that particular proposal might not help students get through college and instead suggested making student loans for that period forgivable.

The Senate filibuster prevents Biden from passing a spending plan without significant Republican support, and Democrats have sought for months to woo Manchin’s backing for an infrastructure bill that can proceed without it.

Sen. Roy Blunt, R-Mo., pushed back against the proposed spending increases, especially because much of the aid already allocated to schools earlier in the pandemic has not been spent. He said Education Department documents showed schools spent about $9 billion of the more than $190 billion distributed so far from various COVID-19 recovery bills.

“I’m concerned about the spending level. … I think that increase on top of the $280 billion in COVID-19 supplemental funding for education last year is a lot of input into the system in a very short period of time,” Blunt said.

Overall, the department would receive a more than $28 billion increase from current year spending, to $102.8 billion.

Biden’s budget plan proposes an overall 8% increase in federal discretionary spending, or about $118 billion, governmentwide. The proposed Education Department budget makes up almost a quarter of that increase.

Democrats on the panel mostly praised the spending plan, arguing the increased investments would help students recover from the pandemic, which saw many fall behind due to remote learning problems. Sen. Patty Murray, D-Wash., the subcommittee chair, praised the proposed increase for Title I programs as well as in Individuals with Disabilities Education Act grants.

“One of the biggest issues facing our nation is getting our students back on track and addressing the lost learning time that they have experienced,” Murray said. “We know students of color, students with disabilities, students in rural and tribal communities, students from families with low incomes, have borne the brunt of this pandemic.”

But Cardona faced criticism from some panel members over the administration’s handling of recovery funds. Sen. Jeanne Shaheen, D-N.H., said schools in her state faced delays in fund distribution that may prevent them from starting school upgrades before winter sets in.

Additionally, Sen. Cindy Hyde-Smith, R-Miss., pushed Cardona to have the department address how schools that have opened this school year may use the federal funds meant to assist in reopening efforts.

Cardona pledged to work with both senators on those issues, as well as making sure schools could use those funds flexibly.