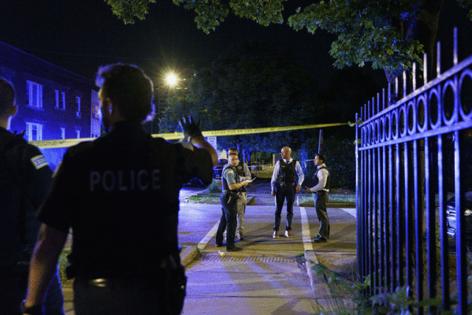 Four men and a woman suffered gunshot wounds during the attack in the 3800 block of West Monroe Street about 9:20 p.m., authorities said in a media notification. One of the people was in critical condition after the shooting, but four others had been listed in good condition, officials said.

The attack near Garfield Park was at least the second shooting with four or more victims in Chicago Tuesday. Earlier, eight people were shot, four of them fatally, on the city’s South Side.

Police said the five people had been standing outside “when they were shot, possibly by multiple offenders.”

– A 38-year-old man who suffered multiple gunshot wounds to the leg. He had been listed in critical condition at Stroger Hospital.

– A 33-year-old man who suffered a gunshot wound to the leg. He had been listed in good condition at Stroger Hospital.

– A 29-year-old woman who suffered a gunshot wound to the back. She had been listed in good condition at Mount Sinai Hospital.

– A 39-year-old man who suffered gunshot wounds to the shoulder and leg. He had been listed in good condition at Mount Sinai Hospital.