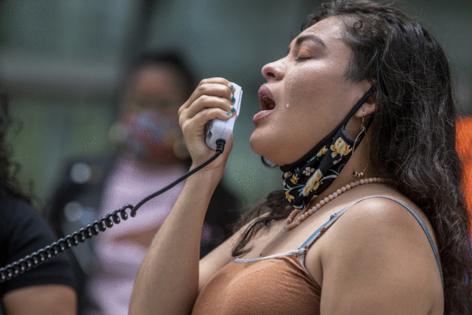 LOS ANGELES — Maria Lopez was skeptical when President-elect Joe Biden announced early in the year that he would send a groundbreaking legislative package to Congress that would overhaul U.S. immigration policy and offer a pathway to citizenship for 11 million people, including herself and her parents.

Lopez, 31, a Mexican immigrant who lives in San Jose and works at a local university, is a recipient of DACA, the Obama-era executive action that allows approximately 700,000 people living illegally in the United States, after being brought here as children, to receive a renewable two-year reprieve from deportation and become eligible for a work permit. Across three presidential administrations, so-called Dreamers — the greatest number of whom live in California — have waited for the U.S. government to grant them permanent residency.

Still, on a desert hike during a recent vacation with friends, Lopez couldn't help but keep tabs on her Instagram account, incessantly refreshing her phone's browser to get the latest on President Joe Biden's speech before Congress, in which he outlined priorities for his first 100 days in office.

At that joint session of Congress on April 28, Biden called for legislators to make DACA (Deferred Action for Childhood Arrivals) permanent, even if it rejected his broader immigration policy goals. "If you don't like my plan, let's at least pass what we all agree on," he said.

Biden's shift from pushing a comprehensive bill to a more piecemeal approach that likely would benefit Dreamers like Lopez, but leave out her parents and millions of others, left her feeling disappointed, but not surprised.

"We've been promised so many things before," Lopez said. "To me, it was just another white man making promises. I already didn't have much hope. But I guess something is something, right?"

Biden's speech in April marked a significant departure from past immigration strategy for the contemporary Democratic Party, presenting a new vision on how the party engages on immigration. Instead of going all in on a broad immigration overhaul, the party's playbook is focusing on a more targeted approach, hoping for narrower immigration fixes.

Even if the new administration succeeds in grasping the relatively low-hanging fruit of DACA expansion, Biden's speech signaled the end of tackling comprehensive immigration reform, said Roberto Suro, a public policy professor at the University of Southern California, who has followed immigration issues for decades.

"Comprehensive immigration reform was already dead. It was dead for years. Now it's really dead," Suro said. "You now have an American president who went before Congress and said, 'I'm not going to hold out for the big deal of a bill,' even though he was the one who proposed the big deal. He said, 'I will take what I can get.' That's a big change."

Even before Biden entered the the White House, the administration tried to reassure supporters that incoming officials would gradually review, and likely reverse, some of Trump's harshest measures.