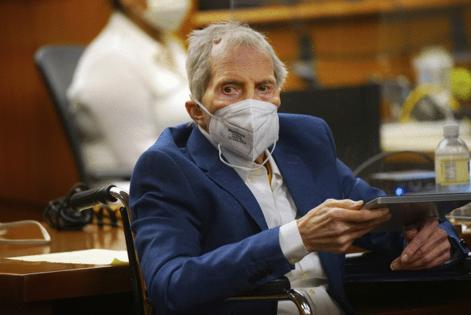 As his blanket slowly slipped off his shoulders, Durst heard Susan Harmon describe for jurors how she allegedly received a distressing call from Durst’s close friend Susan Berman — the murder victim at the center of the Los Angeles trial — in the hours after Durst’s first wife Kathie Durst went missing in New York in 1982.

“I’ve got to tell you this,” Berman allegedly told Harmon, a friend she’d met years earlier in boarding school.

“She said that her friend Bobby had had a fight with his wife. She didn’t know what she was going to do,” Harmon testified. “He’d had a fight, there was an accident on the stairs and that she had to do something.”

Durst, 78, is on trial for murdering Berman inside her Los Angeles home in December 2000.

Prosecutors claim Durst’s motive traces back to Kathie. They claim the wealthy scion of a New York real estate dynasty murdered Kathie to avoid a bitter divorce, drafted Berman to help him cover it up and then shot Berman execution-style nearly two decades later to guarantee her silence.

“She was agitated. It kind of made me agitated,” Harmon said of Berman’s demeanor on the call she received before Kathie’s disappearance started making headlines.

“She called me upset, and she was going to do something about it,” Harmon testified. “She got him out of a pickle.”

Under cross-examination, defense lawyer David Chesnoff confronted Harmon over an interview she gave Deputy District Attorney John Lewin in 2015 during which she stated she felt “a little confused” about some details and might benefit from hypnosis.