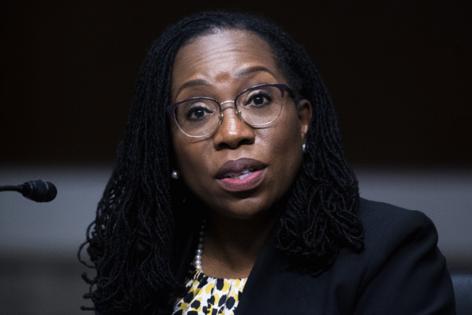 WASHINGTON — The Senate voted Monday evening to confirm Ketanji Brown Jackson to the influential federal appeals court in Washington, with Democrats touting the professional and demographic diversity she brings to the bench.

The 53-44 vote was mostly along party lines to put Jackson on the U.S. Court of Appeals for the D.C. Circuit, which attracts controversy because it handles cases of national sweep on environmental, labor, immigration and other policy issues.

Jackson also has been mentioned as a potential pick by President Joe Biden for any future Supreme Court vacancy, since he has pledged to nominate the first Black woman for the high court.

Jackson is a former public defender and member of the U.S. Sentencing Commission, and has been a federal district court judge in Washington since she was appointed by President Barack Obama in 2013.

Senate Majority Leader Charles E. Schumer cited on the floor Monday a headline that said Biden has nominated as many minority women to be judges in four months as President Donald Trump saw confirmed in four years.

“That’s an amazing statistic. Women, especially women of color, have long been underrepresented on the federal bench,” the New York Democrat said. “Along with President Biden, the Senate Democratic majority is working quickly to close the gap.”

Last week, three Republicans — Susan Collins of Maine, Lindsey Graham of South Carolina and Lisa Murkowski of Alaska — joined Democrats in a procedural vote to allow the confirmation vote. On Monday, they all voted to confirm Jackson.

Jackson is the first Biden appointment to the nation’s federal appeals courts, which have the final say on all but about 70 cases every year that the Supreme Court chooses to review.

Those appeals courts were a focus for Trump, who set a record for the pace of his appointments and appointed 54 appeals court judges.

The D.C. Circuit is considered one step from the Supreme Court, and several justices have moved from the D.C. Circuit to the high court, including Chief Justice John G. Roberts Jr., Clarence Thomas and Brett M. Kavanaugh.

That added a layer of subtext to the confirmation vote Monday. Jackson is a former clerk for Justice Stephen G. Breyer, who is now the subject of speculation about whether he will step down at the conclusion of the current Supreme Court term at the end of this month.

Liberal advocacy group Demand Justice has run advertisements to back Jackson’s nomination to the D.C. Circuit but has also called for Breyer to retire so that Democrats can fill the vacancy while they control the Senate.

Senate Minority Leader Mitch McConnell, in an interview Monday with conservative talk radio host Hugh Hewitt, would not commit to holding a confirmation hearing for a Biden nominee to the Supreme Court if Republicans regained control of the Senate in the 2022 elections.

“We’d have to wait and see what happens,” the Kentucky Republican said.

And McConnell said it would be “highly unlikely” that a Republican Senate would hold a hearing or vote on a Biden nominee in 2024, the final year of his term in office.

“In fact, no, I don’t think either party if it controlled, if it were different from the president, would confirm a Supreme Court nominee in the middle of an election,” he said.