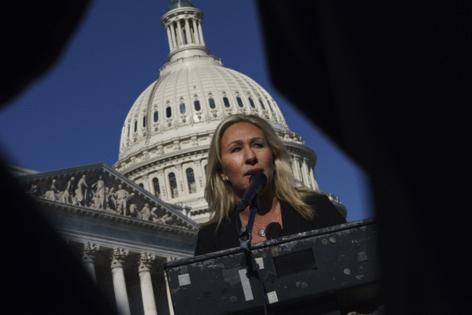 WASHINGTON — Facing criticism from members of her own party and the possibility of further discipline, U.S. Rep. Marjorie Taylor Greene has apologized for her comments last month comparing coronavirus restrictions to the Holocaust.

Greene made her apology during a news conference Monday evening and after visiting the United States Holocaust Memorial Museum in Washington. She said her parents, including her father who died in April, had taught her to own up to her mistakes.

The congresswoman said she had agonized after making comments in late May that drew false parallels between the treatment of Jewish people by the Nazis and coronavirus recovery measures under President Joe Biden, such as mask mandates and efforts encouraging people to get vaccinated. But she said the museum visit is what convinced her she should say something publicly.

“The horrors of the Holocaust are something that some people don’t even believe happen,” she said, according to video of her remarks posted by a reporter for Forbes. ”Some people deny, but there is no comparison to the Holocaust. And there are words that I have said — remarks that I have made — that I know that are offensive, and for that I want to apologize.”

Greene’s remarks may or may not trickle to the conservative outlets where her comments were first made. She did not post her apology or the press conference on social media, her main vehicle for communicating with supporters and other far-right activists.

During a Monday interview on “The Water Cooler” podcast with David Brody, the same place where she initially made the comments about the Holocaust, Greene did not say she would be visiting the museum or express any contrition about statements she apologized for later.

Responding to a question from Brody about a Change.org petition urging Congress to expel Greene in response to those comments, she blamed Democrats, antifa groups and Black Lives Matter protesters.

It also led Democrats to renew calls for Greene to be publicly reprimanded or removed from Congress.