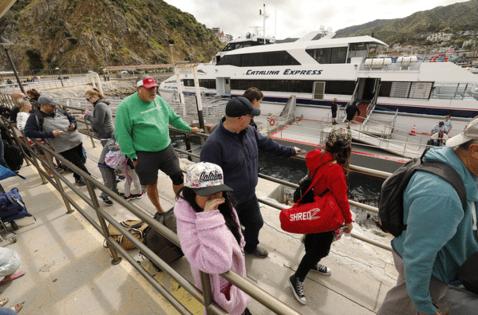 The Los Angeles County Fire Department received a call shortly before 6 p.m. Thursday about a man who had either fallen from or jumped off the Catalina Express when it was about three miles off the coast. The man had not been located overnight, and the search continued at dawn Friday, with roughly 100 personnel scouring more than 100 square miles of water.

The man was identified as 24-year-old Keion Dade of Moreno Valley.

Brahm said the Coast Guard relies on a computer program that determines the maximum time a person could survive in the water based on factors such as the water temperature and the person’s age and weight. The program said Dade could survive 25 hours.

“We normally go a little bit longer than that,” Brahm said. “We couldn’t find him.”

Kiami Dade, 22, described her brother as a social, funny and loving person who dresses sharply and loves God. He’s the kind of big brother who looked out for her by telling boys to stay away. The former Canyon Springs High School prom king was preparing to start a commercial trucking business with his dad and brother, she said.

Keion and his girlfriend went to Catalina Island for fun, his sister said. After he went overboard, passengers said he waved his hands in the water, but by the time the boat circled back he couldn’t be found.

“If they stopped immediately, why didn’t they see him in the water?” she said.