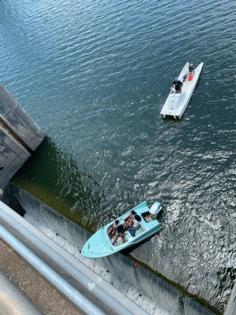 Emergency responders saved all four passengers who had been stuck in the boat on the edge of the 60-year-old dam that forms the lake from the Colorado River. No one was injured.

Witnesses on North Pleasant Valley Road called 911 at 2:36 p.m. after observing the front half of the boat precariously perched "up against the dam."

On the call, the witnesses expressed fear that the boat looked "like it's going to go over the dam," according to Austin-Travis County EMS.

The boat's four female passengers had rented a boat earlier that afternoon from Retro Boat Rentals, a company that specializes in renting out fiberglass runabout boats from the late 1950s and early 1960s.

The boat drifted too close to the dam and did not have enough power in its electric motor to pull away, Brad Smith, an Austin police Lake Patrol officer, told ABC News. The passengers called the boat company for assistance, but Retro Boat Rentals staff members also got stuck on the dam trying to help them.

None of the boat's four passengers was wearing a life vest.

"We have policies and procedures in place to raise awareness of lakeway boundaries," Retro Boat Rentals manager Sam Kohler told the Austin American-Statesman. "All of our boats are equipped with necessary safety features including life jackets at all times."

STAR Flight rescue helicopter crews lowered life vests down to passengers within 15 minutes of the call. Austin police's Lake Patrol officers then connected to the company's two boats and pulled them away from the dam safely by using a more powerful gas-powered boat.