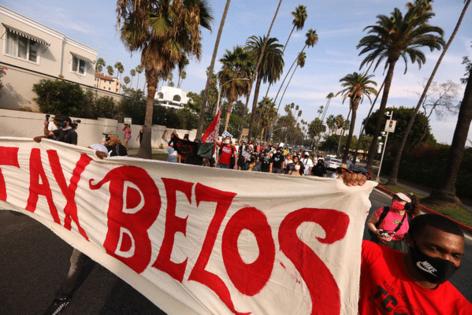 Amazon.com Inc. founder Jeff Bezos has the resources to launch himself into space. Elon Musk does, too.

In many ways, though, the world’s richest people left the rest of us behind long ago.

The world’s wealthiest 500 individuals are now worth $8.4 trillion, up more than 40% in the year and a half since the global pandemic began its devastation. Meanwhile, the economy’s biggest winners, the tech corporations that created many of these vast fortunes, pay lower tax rates than grocery clerks, and their mega-wealthy founders can exploit legal loopholes to pass huge windfalls onto heirs largely tax-free.

Now, a group powerful enough to challenge the supremacy of the tech titans is on the verge of taking action. The leaders of the Group of Seven, including U.S. President Joe Biden and U.K. Prime Minister Boris Johnson, meet in southwestern England this weekend, where they’re expected to endorse a plan to plug holes in the world’s leaky tax system.

While the changes still need approval from a larger group of nations, including China, before becoming reality, the agreement by the G-7 marks a historic turning point after decades of falling levies on multinational corporations.

“It is very easy for multinationals and the richest people to escape tax. What we are seeing with the G-7 is that the time has come for politicians to take back power,” said Philippe Martin, a former adviser to French President Emmanuel Macron who now heads the Conseil d’Analyse Economique. “There is a window of opportunity, a turning point at which they are realizing they need tax power and they need to spend more.”

The deal would bolster Biden’s own plans to boost taxes on corporations and the wealthy by raising rates, making heirs pay more, and equalizing rates between investors and workers.

The proposals are part of a global revival of initiatives to target the rich, from Buenos Aires to Stockholm to Washington, including new taxes on capital gains, inheritances, and wealth that have gained momentum since Covid-19 blew massive fiscal holes in government budgets around the world.

U.S. Treasury Secretary Janet Yellen framed the G-7 deal as a way for governments to protect their national sovereignty to set tax policy.

“For too long there has been a global race-to-the-bottom in corporate tax rates,” Yellen said following the G-7 finance ministers’ meeting in London last week, ahead of this weekend’s gathering.

MINNEAPOLIS — More than a year after he murdered George Floyd by kneeling on his neck for more than nine minutes in the street, former Minneapolis police officer Derek Chauvin will face sentencing Friday for the crime ...Read More

MINNEAPOLIS — Republicans' push for voter ID and a provisional ballot system appears to have failed at the Minnesota Capitol, and Democrats' hopes to expand voter access and felon voting rights have fallen by the wayside...Read More

More than 1 million adults in the U.S. identify as nonbinary, according to a groundbreaking new study published Tuesday by the Williams Institute at UCLA School of Law, the nation’s leading research center on sexual ...Read More