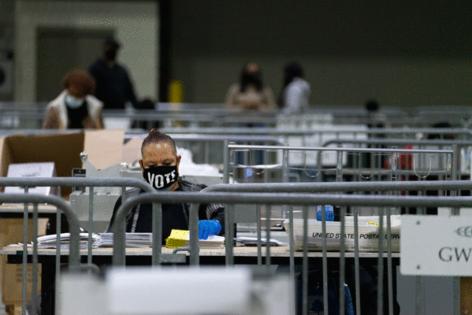 ATLANTA — Long after the presidential election was settled, a perpetual quest to find evidence of fraud continues in Georgia through demands for ballot inspections and audits.

A ballot analysis is pending in Fulton County after a judge recently allowed a review of high-resolution copies of absentee ballots. The county has asked the judge to dismiss the case before the ballot inspection moves forward.

Election audits are the latest attempt by Trump’s supporters to question the outcome of the election. While unbiased audits are meant to increase public confidence or find errors, election experts say these belated ballot inspections often lack standards to ensure objective findings.

But skeptics of the election say those audits didn’t go far enough. They want a deeper review to try to find whether there were counterfeit ballots, as alleged by Republican Party members who said they saw “pristine” ballots without folds and perfectly filled-in ovals during Georgia’s hand recount.

There’s no evidence of significant fraud in Georgia’s election, according to state and county election officials. The secretary of state’s office is investigating over 100 complaints of irregularities in last year’s general election, and even if all of them exposed invalid votes, Biden still would have won.

The Georgia senators who visited Arizona’s ballot review, run by a company called Cyber Ninjas rather than election officials, haven’t revealed their next steps. The company’s chief executive officer had tweeted support for Trump’s election conspiracy theories. It has no previous experience with election audits.

Partisan election reviews without strict rules and a strong chain of ballot custody are nothing more than attempts to find a different result, said David Levine of the Alliance for Securing Democracy, an organization that advocates for election integrity. Arizona’s ballot inspection is missing those safeguards, he said.