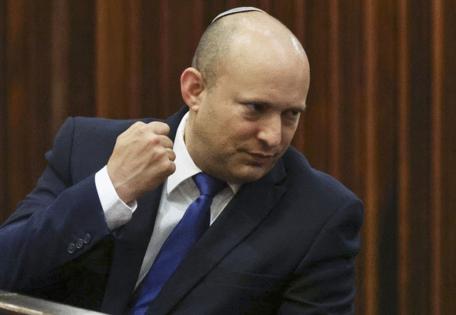 TEL AVIV, Israel — Naftali Bennett, the man on the brink of becoming Israel's next prime minister, has long been adept at keeping a foot in disparate worlds. That shape-shifting quality proved crucial in propelling the 49-year-old politician to the threshold of power in a country as deeply divided as it has been in nearly three-quarters of a century of statehood.

As the head of a small hard-line nationalist party, Bennett — son of American immigrants, one-time elite military commando, startup entrepreneur who made a high-tech fortune — is in many ways an unlikely figure to emerge from the no-holds-barred scrum of Israeli parliamentary politics with his hands on the biggest prize of all.

But a combination of happenstance, perseverance and more than a touch of raw political opportunism has put Bennett in position to push aside his former friend and mentor, Prime Minister Benjamin Netanyahu, when the Knesset, or parliament, holds a vote of confidence in a new ruling coalition Sunday.

Ousting Israel's longest-serving leader is no simple task, let alone governing in the aftermath of a bruising, era-ending change of power. And Bennett isn't even the official chief of the "change coalition," the kaleidoscopic political grouping that is united in its desire to dislodge Netanyahu — and precious little else.

In an extraordinary concession, centrist politician Yair Lapid, who leads the anti-Netanyahu alliance's largest party, agreed to share the top job in rotation, with Bennett taking the first two-year turn. Because Bennett's party was just large enough for him to be courted as a swing vote, Israeli commentators called it a case of a political king-maker unexpectedly becoming king.

"He won the lottery," political analyst and pollster Dahlia Sheindlin said, noting that, while technically possible, it is virtually unheard-of for the leader of a party with a single-digit seat count in parliament to ascend to the premiership. "But he also won the strategic lottery. He made this happen."

Although skilled at cultivating political relationships, Bennett is something of an enigma even to those who have long been acquainted with him.

Fluent in American-accented English — just as Netanyahu is — Bennett is culturally familiar with North America after stints of living in Canada and the United States. He was born in the northern Israeli city of Haifa to Myra and Jim Bennett, who immigrated to Israel more than a half-century ago from the Bay Area.

At various points in his life, Bennett has chosen to move in circles where he was likely to be perceived as an outsider. In his youth, he was one of the first religiously observant recruits to an elite military commando unit in which Netanyahu had served years earlier.

Bennett still wears a small yarmulke, or skullcap — in Israel, normally a signifier of devout Orthodox Judaism — which clings to his bald pate in a precarious manner that even admirers sometimes lightly mock. But his degree of religious observance is sometimes described by Israeli observers as "Modern Orthodox lite." His wife, Gilat, a high-end pastry chef, is reported to be secular but a keeper of the Sabbath.