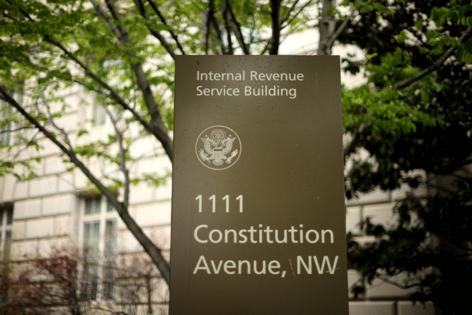 House Ways and Means Republicans at a joint subcommittee hearing Thursday said they couldn’t support removing a big chunk of the IRS budget from the annual appropriations process in part because of the leak of a massive trove of personal tax return information earlier this week.

President Joe Biden wants to boost the IRS budget by $80 billion over 10 years, mostly through mandatory funding that would flow automatically, to provide a sustainable budget that would allow the agency to step up its enforcement activities. The president is also asking Congress to enact a sweeping new law requiring financial institutions to report gross inflows and outflows on all business and personal accounts above $600 to the IRS.

Treasury estimates that combined these proposals would narrow the tax gap of revenues owed but not paid and raise roughly $700 billion over 10 years.

Adrian Smith, ranking member of the Select Revenues Subcommittee, said he’s concerned about establishing a mandatory funding stream for the IRS. The Nebraska Republican said he’d be glad to work with appropriators to give the IRS more long-term certainty but that can be done through regular appropriations “to ensure we continue to have proper oversight of the agency when issues arise.”

Several Republicans cited the leak of more than 15 years' worth of wealthy individuals’ tax returns to ProPublica as even more reason Congress needs to be careful not to cede any oversight authority over the IRS’s funding.

“It seems to me that is just patently, egregiously bad,” Tom Rice, R-S.C., said.

The Ways and Means Committee would still have oversight over the IRS “regardless of the source of funding,” he said. “And you’d expect the IRS to have routine reports on how they’re doing on this as a way to help improve oversight as well.”

Smith also took a subtle swipe at Democrats for increasing the agency’s responsibilities with their economic policies. “We should also keep in mind anytime we ask the IRS to devote resources to mailing monthly checks or providing insurance subsidies, those are resources that can’t go to enforcement or customer service,” he said.

‘Traitors to our country’

Republicans reiterated concerns about increasing financial institution reporting requirements and the implications that could have on taxpayers’ privacy.

“So where I do certainly believe that everybody should pay what they legally owe, I’m extremely concerned about the privacy aspects here that the administration is looking to expand the IRS, and their reach into people’s personal information … and to information reporting on the specifics of their bank accounts,” Rice said.

Mazur said the administration’s proposal to have banks report annual gross inflows and outflows of accounts is “very similar to the information reporting you already get from your bank about interest income.”

Rep. Donald S. Beyer Jr., D-Va., said while privacy is “incredibly important,” that shouldn’t be used as a “red herring” to keep Congress from collecting information that could help improve IRS audits of wealthy individuals who use complex tax structures to try to shield income from taxation.

“Where’s the balance between the unintended illegal leak of data on a handful of very rich people … and the importance of keeping people from cheating?” he said, without offering evidence the leak was unintended. “Is our priority to protect these traitors to our country who refuse to pay their fair share of the price of freedom, who cheat all those honest taxpayers who are out there?”

Some of the billionaires ProPublica reported on this week include Democratic megadonors such as hedge fund titan George Soros and Michael Bloomberg, former presidential candidate and founder of financial data and news provider Bloomberg LP. Others include investor Carl Icahn, a onetime adviser to former President Donald Trump, and media mogul Rupert Murdoch, head of News Corp. and founder of the Fox television network.

Critics say the richest individuals are able to skirt higher taxes through deriving much of their wealth from unrealized capital gains that aren’t taxed but can be borrowed against, and from asset sales that are taxed at a lower rate than wages.

Their bill would apply a 10-percentage-point tax to income above $1 million for individuals and $2 million for married couples. The tax would apply to capital gains and other investment income in addition to wage income. It wouldn’t touch unrealized gains, though Senate Finance Chair Ron Wyden, D-Ore., is among those who have pushed to tax such paper wealth annually.

During the hearing, Beyer asked if financial institutions reporting account inflows and outflows could actually lead to less IRS audits of certain taxpayers. Mazur confirmed that was the intent.

“Really it could reduce the amount of audits on otherwise compliant taxpayers by having this information available,” Mazur said. “Conversely it would increase the scrutiny on taxpayers who are kind of grossly noncompliant where there’s large inflows and outflows into accounts and relatively small amounts of taxable income reported.”

Rep. Brad Wenstrup, R-Ohio, expressed concern that asking banks to effectively conduct enforcement on behalf of the IRS “puts their reputations and their relationships with their customers at risk.” He also questioned Mazur on what outreach the administration was doing to ensure smaller and independent banks aren’t “smothered with compliance burdens.”

“For the smaller and community banks, there could be some cost,” Mazur said. “This is something where we’d be as an administration very willing to work with the affected institutions to figure out what is the best way to go about doing this.”

One of the few things members of both parties agreed on during the hearing is that the source of the leak should be investigated.

Doug O’Donnell, the IRS deputy commissioner for services and enforcement, told the panel that Rettig immediately referred the matter to Treasury Inspector General for Tax Administration J. Russell George for investigation and that George confirmed receipt of the referral.

“TIGTA is the authorized federal agency to investigate,” O’Donnell said, noting Treasury also referred the matter to the FBI and the U.S. attorney’s office for the District of Columbia. Intentionally disclosing confidential taxpayer information is a felony.

“We fully support any investigation undertaken,” O’Donnell added. “We take this matter very seriously, and we’ll be pushing as hard as we can to ensure that we learn as soon as possible what actually did happen.”

Republicans, however, were not assured that the ProPublica leak was an isolated incident that won’t be repeated. Some harkened back to the controversy during the Obama administration over the IRS division that processes tax exemptions singling out conservative groups’ applications for extra scrutiny.

“My underlying concern is that the IRS contains an immense amount of power,” Smith said. “I was at the airport a while back and I noticed where there was an IRS agent who was empowered to walk around the magnetometers at the airport.”