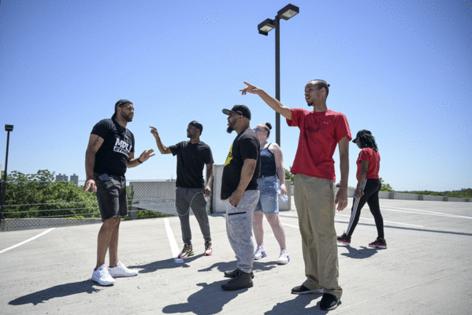 MINNEAPOLIS — A woman in Winston Smith's car when a federal task force shot and killed him last week never saw Smith with a weapon, her attorneys said Thursday — disputing authorities' claim that he shot first from the vehicle.

Rodne made a brief statement on the unnamed passenger's behalf Thursday at a news conference at Girard Avenue and W. Lake Street, addressing reporters outside the parking garage where Smith, 32, was killed June 3.

Several activists and lawyers spoke at the emotional news conference to continue raising questions about the lack of transparency in the case, a week after officials said Smith fired from his car as a task force led by the U.S. Marshals Service tried to arrest him on a warrant from Ramsey County on suspicion of being a felon in possession of a gun.

On Thursday evening, Minnesota Bureau of Criminal Apprehension spokesman Bruce Gordon said the investigating agency stands by its earlier statement that evidence from the scene "indicates that [Smith] fired his weapon from inside the vehicle." BCA investigators recovered a handgun and spent cartridges from "inside the driver's compartment," the BCA's statement continued.

Deputy Chief Michelle Coghill of the U.S. Marshals Service said that agency could not comment because the investigation is ongoing.

Since asserting early on that no body or dash camera or surveillance footage is available in the case, authorities have held no public briefings or news conferences on Smith's shooting.

Smith and his female passenger had just left Stella's Fish Cafe when authorities pursued and shot him on the fifth floor of the parking garage across the street. Several people close to Smith, including his brother Kidale Smith, have said in recent days that the woman told them he had been reaching for his phone so he could livestream the interaction.

The woman in the car was injured by shattered glass during the shooting.

"She is extremely traumatized as a result of what happened to her ... that woman could have been killed," activist Nekima Levy Armstrong said at the news conference.