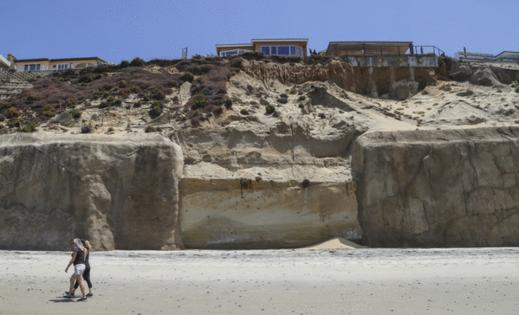 SAN DIEGO — After twice previously denying the application, the California Coastal Commission unanimously approved construction of a Solana Beach seawall Thursday with a number of modifications, including a $140,000 donation to improve beach access.

The financial contribution was among the conditions in a legal settlement approved by Coastal Commission Executive Director John Ainsworth with the four adjacent Pacific Avenue homeowners who submitted the application for a third time.

The homeowners — Richard A. Schrager, Mark Van Oene, Robert E. DeSimone and Eron Jokipii — filed a lawsuit Oct. 19, 2020, in San Diego Superior Court to overturn the commission's denial. The settlement, signed in late March, was contingent upon the commission's approval of the seawall application.

The seawall will fill a 50-foot-long gap in an otherwise continuous concrete barrier that protects dozens of single-family homes atop the city's 90-foot-tall eroding coastal bluff. The owner of the house had signed a deed restriction in the mid-1990s prohibiting any new shoreline protection as part of a rebuild that the Coastal Commission approved. The home is valued at $4.3 million.

Often called "coastal armoring," the seawall will be 35 feet high and 28 inches thick, with a surface designed to look like natural rock. The slope above the wall will be protected by a blanket-like geogrid structure to hold back the sandy soil in wind and rain.

Coastal Commission policies and environmental groups such as the Surfrider Foundation oppose the construction of seawalls because studies show they contribute to beach erosion. In many cases, as in Solana Beach, the devices are built on public property, using space that otherwise would be available for recreation, to protect private property.

However, the Coastal Commission staff determined that there was no way to protect the adjacent houses from falling into the ocean without filling the gap at 245 Pacific Ave., which is owned by Jokipii.

"It's not the first time in Solana Beach where approval was granted as the least damaging alternative," Commission staffer Dennis Davis said at Thursday's virtual meeting. "Often there is no way to leave a gap ... without endangering homes entitled to protection."

The Coastal Commission also approves seawalls for what's considered an emergency, such as the repairs needed to protect the railroad tracks at the site of a recent bluff collapse in nearby Del Mar.

The Solana Beach permit approved Thursday is good for 20 years. After that, the homeowners will have to submit a new application to remove it or show why it should be maintained.