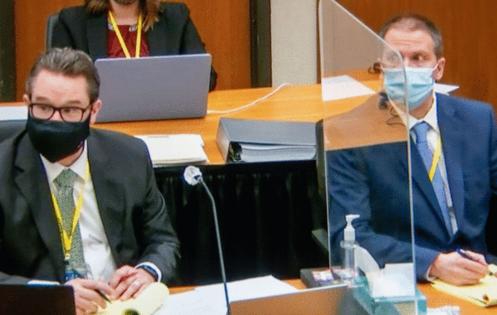 MINNEAPOLIS — Bodycam video from police on the scene, along with testimony about asphyxiation, were crucial in convicting fired Minneapolis officer Derek Chauvin of murdering George Floyd, the second juror to speak out in the historic case said Thursday.

Journee Howard, known until now only as Juror No. 9, said, "there was a multitude of things" that played into the prosecution meeting the legal standard that she and the other jurors needed to agree beyond a reasonable doubt that Chauvin was guilty of second-degree unintentional murder, third-degree murder and second-degree manslaughter.

The 25-year-old Howard, who put her modeling and acting studies on hold for the trial, is the second of the 12 jurors who deliberated to speak publicly since the verdicts were reached on April 20 in Hennepin County District Court. An alternate juror also gave interviews shortly after the trial ended.

Howard, of Minneapolis, said she was especially swayed by the detailed testimony of Dr. Martin Tobin, the lung specialist who bolstered the prosecution's contention that Floyd died from asphyxiation as a direct result of being pinned facedown on the pavement at 38th and Chicago on May 25, 2020, for more than nine minutes by Chauvin and two other officers.

"He was fantastic," Howard told the Star Tribune, who added that Tobin's credibility was enhanced by not being paid for his testimony. "He was very, very convincing. He was probably my favorite."

Among the other witnesses for the prosecution, Howard also gave high marks to Minneapolis Police Chief Medaria Arradondo.

"He shocked me with his testimony," she said. "I wasn't expecting him to be so blunt when he said this is not what we teach or how we train."

The jurors and the global audience watching the trial online saw a substantial amount of video that showed Floyd's arrest that night, and Howard said she gave greater weight to the officers' bodycam recordings than to the bystander's viral video of Floyd's arrest and death that sent shock waves around the world.

Howard, who first spoke to nationally syndicated radio host Erica Campbell, said that even if the video from curbside witness Darnella Frazier never existed, she still would have voted to convict Chauvin.

"Her video was only one very small perspective," Howard said. "The bodycam footage and audio was more damaging against Derek Chauvin than anything else.