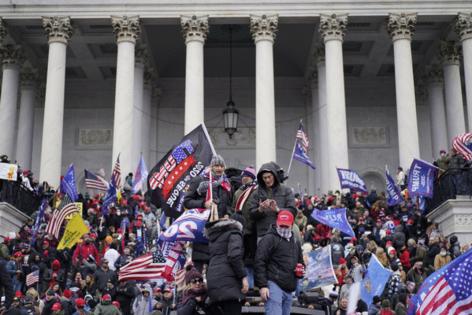 LOS ANGELES — Two Orange County extremists — a former police chief and his partner in organizing Stop the Steal rallies — have been indicted along with members of the Three Percenters militia for their roles in the Jan. 6 Capitol insurrection.

Though all are charged with being in restricted areas of the Capitol, Warner is the sole indictee to be accused of entering the building, via a broken window. Kinnison and Warner are charged with destroying evidence, while Taylor also faces a weapons count for carrying a knife with a blade longer than 3 inches.

The grand jury indictment, unsealed Thursday, alleges the men conspired on social media prior to the riot — including on a Telegram channel dubbed Answer the Call and via text messages — creating travel plans that included discussion of bringing weapons to the Capitol. On the day of the riot, they breached the Capitol and encouraged others to do so as well, posting videos and pictures as they went, the indictment says.

On Dec. 29, prosecutors allege Taylor wrote on that Telegram channel that, “I personally want to be on the front steps and be one of the first ones to breach the doors!”

That same day, Taylor texted Hostetter to ask if he was bringing firearms, according to the indictment. Hostetter allegedly replied, “NO NEVER (Instagram now monitors all text messages ... this has been a public service announcement.)”

Hostetter then texted three emojis of “faces laughing with tears coming out of their eyes,” the court documents allege.

Hostetter and Taylor allegedly connected with the other four men via social media, where they introduced themselves as members of the Three Percenters, an extremist group that often includes ex-military and law enforcement members.

The charges represent the first conspiracy allegation against members of the Three Percenters.

A U.S. Justice Department official said five of the six men are in custody.