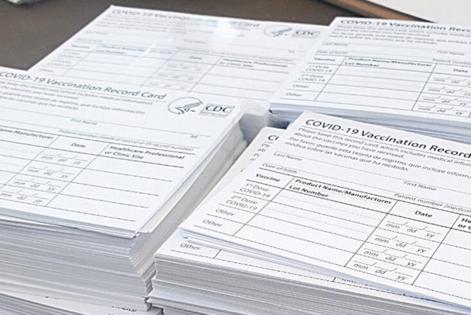 Muhammad Rauf Ahmed, 45, was employed as a nonclinical contract employee at the Pomona Fairplex vaccination site in La Verne on April 27 when police received a call about a possible theft, according to the La Verne Police Department.

A security guard at the site had noticed Ahmed exiting the facility with a stack of cards in his hands.

In total, they recovered 528 cards.

Detective Sgt. Cory Leeper of the La Verne Police Department said Ahmed, of Las Vegas, initially claimed he took the cards to “pre-fill” them and get ahead of his workload. But blank cards are not permitted to leave vaccine sites, Leeper said, and the stacks of cards in the hotel room were still sealed in plastic.

His arrest and charges come amid a larger conversation around vaccine credentials, sometimes referred to as vaccine passports, which may be required for business, school, travel and other activities in the future.

In May, a San Joaquin County bar owner was arrested on suspicion of selling fraudulent COVID-19 vaccine cards for $20 apiece, for which he received felony charges for identity theft and forgery of a government seal.

Leeper said investigators looked to that case to help determine the value of the cards in Ahmed’s possession.

“Assessing the fair market value is tough, because one could argue it was just a blank piece of paper,” he said. But at a $20 valuation, the stolen cards were worth around $10,000, which is considered grand theft.

In L.A. County, COVID-19 vaccination numbers have been slowing, with just under 46% of the county’s residents fully vaccinated. During the week ending June 6, about 240,000 COVID-19 vaccines were administered in the county, compared to about 534,000 during the same week the month before, according to state data.

The Pomona Fairplex site, which was at times administering nearly 4,000 vaccinations each day, is slated to close after June 13 as the county transitions to smaller and more mobile clinics in an effort to reach more people.

The Los Angeles County district attorney’s office said it filed one felony grand theft charge against Ahmed on Wednesday. He is scheduled to appear at the Pomona Courthouse in August.