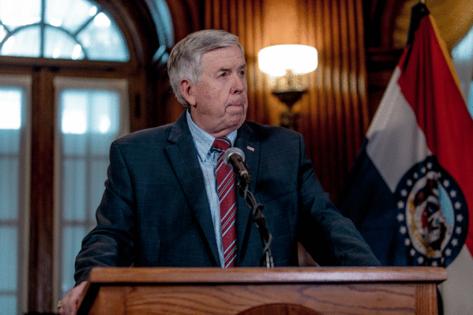 JEFFERSON CITY, Mo. — Missouri police will be barred from enforcing federal gun laws that regulate weapons registration, tracking and possession of firearms by some domestic violence offenders under a bill Gov. Mike Parson, a former sheriff, announced Thursday he will sign into law.

Passage of the “Second Amendment Preservation Act” represents a victory for conservatives who have pushed the legislation for nearly a decade and picked up new momentum this year by responding to the Biden administration’s vows to enact stricter gun control.

It’s been met by outrage and alarm from Democrats and gun control advocates, who have slammed the measure as dangerous in a state with such high rates of gun violence. Missouri had the nation’s third-highest per-capita rate of gun deaths in 2020.

In particular, gun control advocates have focused on what they call the “domestic violence loophole” that the legislation would solidify. Federal law prohibits gun possession for those convicted of domestic violence misdemeanors, but when Missouri passed a permitless concealed carry law in 2016, sheriffs were no longer conducting background checks.

Under the Second Amendment Preservation Act, that federal limitation is one of many gun laws that would be declared “invalid” in the state. Missouri law only prohibits felons and fugitives from having guns.

Critics have questioned the legality of “nullifying” federal laws, pointing to the Constitution’s Supremacy Clause. But proponents of the bill have brushed it off.

Parson’s spokeswoman Kelli Jones wrote in a statement, “The Governor is aware of the legal implications of this bill, but also that, now more than ever, we must define a limited role for federal government in order to protect citizen’s rights guaranteed by the Second Amendment of the United States Constitution.”

“This is about empowering people to protect themselves and acknowledging the federalist constitutional structure of our government,” she said.

The governor will sign the bill in a Saturday ceremony at Frontier Justice, a Lee’s Summit shooting range where Missouri Congresswoman Vicky Hartzler declared her candidacy for U.S. Senate Thursday, promising to keep the seat in conservative hands.