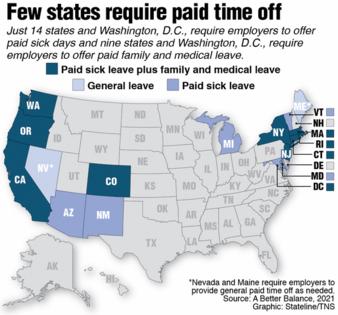 But the pandemic, and the deaths and economic devastation it’s wrought, haven’t really changed the paid time off debate in the states.

Democrats and labor advocates say that now more than ever, workers need to be able to stay home when they’re sick or caring for a family member. Republicans and business advocates, meanwhile, say now’s not the time for imposing costly new mandates on employers.

This past year’s paid leave laws — like most of the prior laws — were enacted in blue states, meaning workers in left-leaning states will continue to have more access to the benefits those measures bring.

New Mexico state Rep. Christine Chandler, lead sponsor of her state’s new paid sick days law, said the pandemic boosted support for her bill — at least among fellow Democrats. “People were very conscious of the fact that illness spreads in the workplace,” she said. “I think that did lend itself to the success of our being able to get the bill through.”

The bill passed without a single GOP vote. “We’ve got all of these small businesses that barely survived COVID, and now you want to add another layer of bureaucratic requirements on top of that,” said Republican state Sen. Bill Sharer.

Texas’ Republican-led legislature recently passed a bill that would prevent cities and counties from requiring employers to provide certain benefits, such as paid leave. Austin, Dallas and San Antonio have paid sick leave ordinances, though they’ve been blocked by court rulings.

"Businesses need certainty and predictability," GOP state Sen. Brandon Creighton, the bill’s sponsor, said before the April Senate vote, according to the Austin American-Statesman. "Now it's our duty to provide certainty so they have a fighting chance to keep their doors open." Creighton’s office said he didn’t have time to respond to Stateline’s request for comment.

The same partisan dynamics are playing out in Congress. President Joe Biden backs a bill that would require employers to give workers at least seven paid sick days a year; he also wants businesses to provide 12 weeks of paid family and medical leave. Current federal law requires 12 weeks of family or medical leave from businesses with at least 50 employees, but the leave is unpaid.

Biden included the paid leave proposal in his sweeping infrastructure plan, which faces strong Republican opposition and an uphill battle in the U.S. Senate.