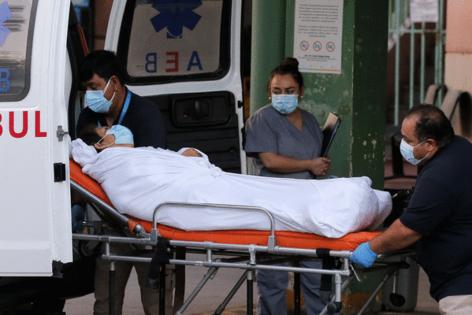 The Health Ministry reported that the seven-day average of new cases remains above 7,000 per day, and that there are only 30 intensive care beds available in Santiago, a region with a population of about 8 million inhabitants.

Chile is tightening restrictions even as it moves forward with one of the most advanced vaccination programs in the world. Mobility levels remain high, with many people flouting restrictions, and some even meeting in clandestine parties. The country has delivered two vaccine doses to over half its target population.

Government officials have attributed the jump to virus spread among the unvaccinated. More than 80% of those hospitalized with coronavirus have not received both doses.

Chile’s benchmark S&P IPSA index fell 0.1% in afternoon trading after the announcement, after rising as much as 0.8% earlier.

The country has already secured roughly 40 million shots for its population of 18 million, in a vaccination campaign that’s been praised by organizations such as the World Bank and the WHO.

So far, Chile has received over 17 million doses from Sinovac Biotech Ltd., 4.6 million from Pfizer-BioNTech, 700,000 from AstraZeneca, and 300,000 from CanSino Biologics Inc. The government today also approved emergency use of Johnson & Johnson’s single-use Janssen vaccine.