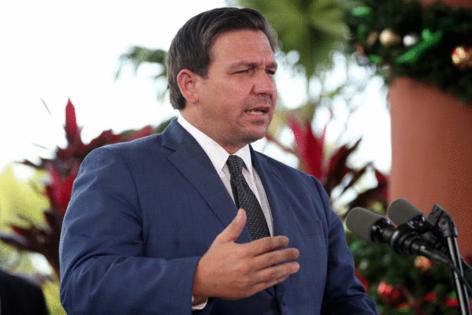 ORLANDO, Fla. — Florida adopted a new rule Thursday to prevent public schools from teaching critical race theory, a push led by Gov. Ron DeSantis as a way to prevent history that would “denigrate the Founding Fathers” from being taught in state classrooms.

DeSantis, following a national conservative playbook, said he wanted to prevent instructors from “teaching kids to hate their country.”

But critics of the rule, and many of the speakers at the Jacksonville meeting, said DeSantis and his GOP backers are trying to prevent schools from addressing racism and its effect on America and from teaching history that doesn’t focus only on white people.

“It’s an effort to whitewash, cover up and candy-coat history,” said Ben Frazier, president of the Northside Coalition of Jacksonville. “Allow teachers to speak the truth.”

The governor, speaking via a video connection, told the State Board of Education that he does not want to stop children from learning about slavery or the civil rights movement, only to make sure they don’t hear “narratives that are not grounded in facts.” He wants to prevent, he has said, students from learning a “false history,” where they “look back and denigrate the Founding Fathers, denigrate the American Revolution.”

In his short address, he offered no instances where Florida teachers had offered inaccurate history lessons but cited problems in schools in Arizona and New York.

The board voted on the rule after hearing from the governor and more than 30 speakers. Florida is among more than a dozen Republican-led states seeking this year to ban critical race theory from its schools.

Critical race theory, initially a legal framework that examined how racism impacted the country’s institutions, is not a topic taught in Florida’s public schools, nor was it mentioned explicitly in the initial proposed rule, though DeSantis said it would block its teaching.

Critics of the theory often use the term as a broad catchall for what they view as troubling diversity and anti-racism programs in schools, efforts to make the books children read in class reflect the backgrounds of a diverse group of students and historical lessons they see as divisive and anti-American.

Board member Tom Grady proposed amending the rule to add the phrase critical race theory, saying teachers cannot “distort” history nor rely on materials like The New York Times’ 1619 Project, which sought to “reframe” American history by putting slavery “at the very center of our national narrative.” The project faced fierce criticism from former President Donald Trump and some historians.