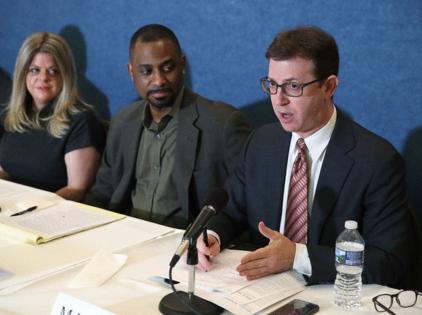 A Michigan man who threatened the lawyer for the whistleblower who spurred the first impeachment of former President Donald Trump was ordered to spend a year and a day behind bars.

Brittan Atkinson, 54, of Beaverton, was accused of sending an email to the whistleblower’s attorney, Mark Zaid, in November 2019, saying “all traitors must die miserable deaths” and that “we will hunt you down and bleed you out like the pigs you are.” Atkinson pleaded guilty in December to making an interstate communication of threat to injure.

In federal court in Bay City, Michigan, on Thursday, Atkinson apologized to Zaid and said he “was in a dark place” and self-medicating when he made the threats, which were sent two days after Trump called Zaid a “sleazeball” at a rally. Atkinson will get credit for the 168 days he’s spent in jail.

Zaid said on Twitter that he was “pleased to see that the rule of law prevailed,” and that “no lawyer or whistle-blower should ever be subjected to this type of unacceptable behavior simply for doing the right thing or their job.” He said he hopes the outcome “will somehow help restore some level of civility to our society.”

WASHINGTON — President Joe Biden plans to name Deborah Lipstadt, a historian and expert on Jewish and Holocaust studies at Emory University in Atlanta, as U.S. ambassador to combat and monitor antisemitism on Friday, ...Read More

OCEANSIDE, Calif. — The families of the nine service members killed last year when their assault amphibious vehicle sank off the San Diego coast are suing the manufacturer of the vehicles, they said at an emotional news ...Read More

The death was announced late Thursday by his namesake, the Levin...Read More

As the U.S. faces an intense surge in unauthorized arrivals on its southwestern border, Vice President Kamala Harris released a blueprint on Thursday that she said would attack the causes of the immigration challenge and ...Read More

“The big concern is that the next variant that might emerge �...Read More