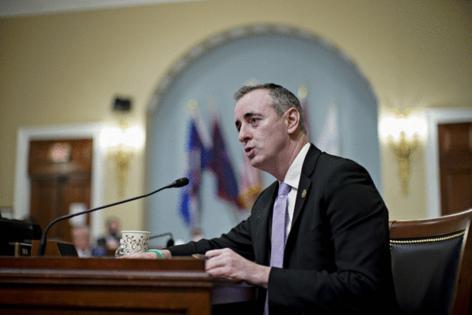 Members had submitted a whopping 229 amendments to the sweeping legislation, which was threaded with provisions aimed at fighting climate change and supporting racial equity in the transportation system. Democrats hope the legislation will become a cornerstone of President Joe Biden’s $2 trillion-plus infrastructure package.

“We don’t agree on a lot of stuff,” he said right around 5 a.m. when the committee gaveled out. “But heck, we got through it. It’s tomorrow… We won’t have to come back later today.”

Ranking Republican Sam Graves of Missouri, who voted against the bill, nonetheless applauded the committee for completing its work.

“I’m just happy that once again we have produced a bill, a surface transportation reauthorization,” Graves said. “It’s not anything I would’ve done or anything that I can support but having said that we’re still doing the people’s work.”

Graves’ comments were a stark contrast from earlier in the debate, when members fought bitterly over issues that seemed unrelated to highway policy.

The markup was briefly nearly derailed, for example, by a harsh debate over an amendment introduced by Rep. Troy Nehls, R-Texas, that would strip federal highway safety dollars from communities that defunded police. That debate devolved into a fight over the Jan. 6 mob attack on the Capitol, with Democrats accusing Republicans who did not back the Jan. 6 investigatory commission of not supporting the police.

WASHINGTON — President Joe Biden plans to name Deborah Lipstadt, a historian and expert on Jewish and Holocaust studies at Emory University in Atlanta, as U.S. ambassador to combat and monitor antisemitism on Friday, ...Read More

OCEANSIDE, Calif. — The families of the nine service members killed last year when their assault amphibious vehicle sank off the San Diego coast are suing the manufacturer of the vehicles, they said at an emotional news ...Read More

The death was announced late Thursday by his namesake, the Levin...Read More

As the U.S. faces an intense surge in unauthorized arrivals on its southwestern border, Vice President Kamala Harris released a blueprint on Thursday that she said would attack the causes of the immigration challenge and ...Read More

“The big concern is that the next variant that might emerge �...Read More