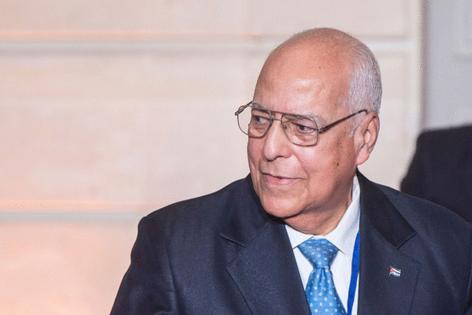 Cuba's top debt negotiator is in Paris this week for talks on debt that has been in default for more than three decades. After a reprieve last year because of the COVID-19 pandemic, Cuba will likely ask the Paris Club for yet another moratorium on payments this year as its economy spirals further downward with no quick recovery in sight.

Ricardo Cabrisas, Cuba's deputy prime minister, met on Tuesday with Emmanuel Moulin, current chairman of the Paris Club, according to Cuba's Foreign Affairs Ministry. It's unclear what they discussed or if meetings with other members of the club's 14 creditor nations are also on the agenda this week.

The ministry said Cabrisas is in Paris this week for "work meetings." In addition to the talk with Moulin on Tuesday, Cabrisas also met with former President François Hollande and with Franck Riester, Minister Delegate for Foreign Trade and Economic Attractiveness. The Ministry didn't provide more details on his agenda.

"The meetings allowed parties to review the main issues on the bilateral agenda and to ratify the common goal of expanding political, economic-commercial, investment and cooperation ties. The exchanges highlighted the existing potential to develop and diversify relations in areas of mutual interest," the ministry said on Twitter late Tuesday.

Cuba will likely argue it can't make any payments right now because of sanctions imposed by the Trump administration in recent years and because of the devastating impact the pandemic has had on tourism, a major source of foreign currency for the island. A sharp decline in exports, which have fallen by nearly a third since 2014, and restrictions on remittances from abroad in recent years have further reduced the sources of revenue Cuba could tap into to service its debt, analysts say. The island's GDP fell 11% last year and long lines for food have once again become commonplace.

"The country is in a very tough situation right now, with severe shortages of food, medicine and other basic necessities; negotiators will probably show creditors Cuba's macroeconomic numbers and argue that as much as they would like to make debt payments a priority, the country has more pressing issues to deal with," said Pavel Vidal, a Cuban economist who worked at the island's central bank and is now a professor at Pontificia Universidad Javeriana in Colombia.

The Paris Club debt was already renegotiated in 2015, when Cuba reached a historic agreement with 14 nations led by France. They agreed to cancel $8.5 billion in overdue interest payments in exchange for a promise by Cuba to pay off $2.6 billion of the original debt — first defaulted on in 1986 — over 18 years through 2033. The group of Cuban creditors includes Australia, Austria, Belgium, Canada, Denmark, Finland, France, Italy, Japan, the Netherlands, Spain, Sweden, Switzerland and Britain.

Last year, the island asked the Paris Club for a two-year moratorium and the waiving of fines on missed payments. Creditors agreed to one year and demanded a new round of talks in the spring of 2021 to discuss unpaid maturities and come up with an agreement for future payments. Cuba was also expected to make some payments on its debt this year, though it's unclear how much. The Foreign Ministry didn't reply to requests for details on its foreign debt and the current negotiations. The Paris Club wasn't immediately available to comment.

Cuba has repeatedly missed payments in all its debts over more than three decades, though at certain times it showed commitment to working out solutions with foreign creditors. In 2011, when Raúl Castro took over leadership of the island from his older brother Fidel, Cuba settled some old debts from state-owned companies. In 2016, the Cuban government paid $5.2 billion to meet debt commitments after an extensive restructuring of its foreign debt the previous year, which included the renegotiated Paris Club debt.

The island's foreign debt had grown at an alarming rate in past years before the pandemic, even as it received revenue from a controversial medical services export program. Between 2013 and 2016, Cuba's foreign debt grew by almost 53% percent, from $11.9 billion to $18.2 billion, according to the most recent data in a 2018 annual report by Cuba's National Office of Statistics and Information.

Now Cuba is in the throes of its worst economic crisis since the fall of the Soviet Union. A painful but necessary currency reform that had been in the works for years was implemented earlier this year, triggering inflation of as much as 500% in the case of electricity. The reform eliminated a dual-currency system and drastically devalued the peso; even with some adjustments in salaries and pensions, Cubans have watched their pay shrink while inflation has spiked.

The currency reform announced earlier this year, at the height of the pandemic, and recent reforms to small and medium private enterprises is a sign the government is working to make Cuba's economy more dynamic. Thee moves will likely encourage creditors, Vidal said. But a lack of transparency in Cuba's macroeconomic data remains a problem.

"This would be a good opportunity for Cuba to be more transparent with its creditors and release data such as international reserves, and update data on its balance of payments," he said.