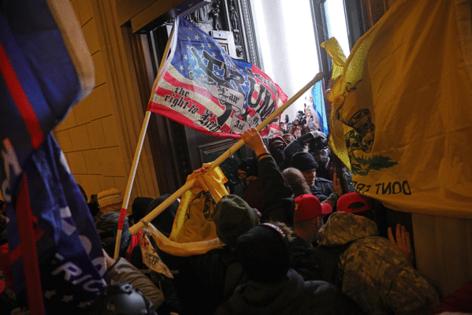 “It’s all or nothing,” Hill said. “Revolution is at hand.”

It’s not clear who heard the call. The video was published on the Toronto-based video sharing site Rumble where it garnered just a few dozen views. Hill also promoted it on Gab, a social media site popular with some far-right figures, but only 27 people follow his account there.

It’s a precipitous fall from a year ago when Hill had a Facebook account with tens of thousands of followers, along with a separate, private Facebook group where he and members of his III% Security Force militia could meet in relative secrecy.

Social media bans by Facebook, Twitter and YouTube have dramatically reduced the reach of extreme right figures like Hill, disrupting their ability to plan and recruit new members, according to experts who monitor domestic extremism.

Social media purges of accounts and groups began in earnest last summer in response to a wave of extremist-linked content during the pandemic, especially accounts linked to the wide-ranging conspiracy theory known as QAnon. Alex Friedfeld, a researcher with the Anti-Defamation League’s Center on Extremism, said social media giants targeted them again after the Jan. 6 insurrection at the U.S. Capitol.

“They are struggling,” Friedfeld said of militia groups. “One of the big reason is the de-platforming that happened after the insurrection.”

Friedfeld said the Hill video reflects the broader sense of anger as the militia movement has come to shoulder much of the blame for the Capitol insurrection.

“They feel like they are under attack. They are feeling the pressure,” he said. “For the first time in long time ordinary people are aware of the movement and there is a stigma to it.”

That disapproval, combined with widespread bans, has been destabilizing for militias across the nation, he said. The 18-minute video of the two men sitting in camping chairs in a grassy field is decidedly low-tech. At one point, the camera toppled over and had to be reset.