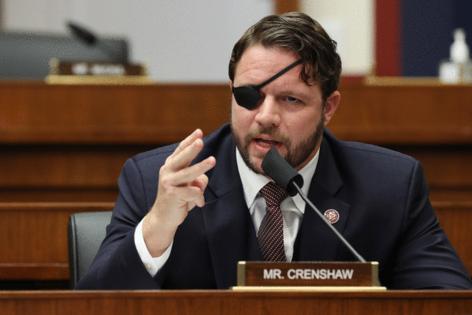 WASHINGTON — Dan Crenshaw had to take a break from making skydiving videos as he continues to recover from surgery on what he’s called his “half a good eye.”

“If you go above a thousand feet, your eye explodes,” the Texas Republican said.

Crenshaw, a former Navy SEAL, is easily identifiable by his eye patch. It’s a constant reminder of the roadside bomb blast in 2012 that destroyed his right eye during a deployment in Afghanistan.

Two months ago, he noticed dark, blurry spots in his vision and rushed in for emergency surgery.

The congressman expects to be back in Washington when the House reconvenes next week. But for the past two months, he’s been grounded in Texas. Even if he had tried to drive instead of fly, the elevation issues would have made it almost impossible, he said.

Doctors found that his retina was in bad shape — something that was always a worry for Crenshaw, who woke up in the dark from a medically induced coma after the 2012 blast. While he miraculously regained sight in his left eye, the buildup of scar tissue eventually began peeling the retina off the back, he said.

Going into surgery to save your vision would be a daunting prospect for anyone, but especially for Crenshaw, who had been through it before.

“You’ve got to make peace with blindness at that point when your retina is detaching,” he said.

Doctors removed some of the scar tissue and reattached his retina before putting a gas bubble in his eye to make sure it stayed in the proper position. He then had to lie face down for a week while his body healed.

Crenshaw said the worst part is behind him. The gas in his eye is dissipating, and his vision has improved enough to allow him “to get around and, not knock into things too much,” but seeing has been a challenge, and looking at screens for a long time is fatiguing.

AUSTIN, Texas — A suspect arrested in connection with the mass shooting on Austin's 6th Street that wounded 14 is a juvenile, and authorities Sunday were still considering what charges he will face, officials told the ...Read More

AUSTIN, Texas — Austin residents and tourists alike returned in droves on Saturday night to the city’s iconic 6th Street entertainment district less than 24 hours after a shooting took place there.

Behind the usual ...Read More

JERUSALEM — Over the last three decades, Israel and the world have seen many sides of Benjamin Netanyahu.

There was the smooth speaker of American English who became a familiar face on international media as Iraqi Scud ...Read More

President Joe Biden entered his first international summit looking for a breakthrough on vaccine pledges for low-income countries, a united front on China and to tee up his meeting this week with Russian President Vladimir...Read More