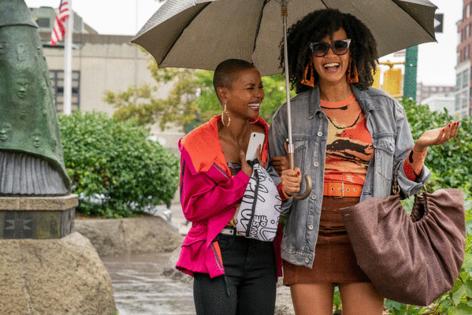 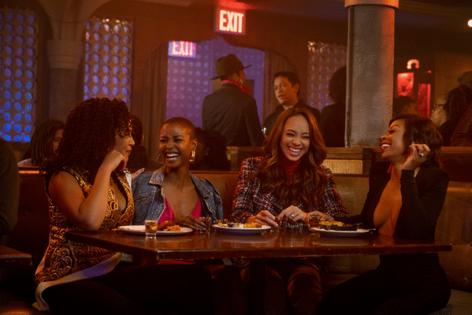 At first, “Run the World” looks a lot like “Sex and the City” — four women in New York, living and loving and laughing.

But the women of the Starz comedy, which premiered Sunday, call Harlem home and embrace the Black sisterhood they found at Spellman College.

“‘Sex and the City’ tapped into something really genius, but as the consciousness shifts and evolves, obviously the program is going to shift and evolve. We’re telling the same story but we’re doing it in a more evolved way,” Andrea Bordeaux, who plays journalist Ella, told the Daily News.

“‘Sex and the City’ was about four women and the lives and their relationships, but the focal point of their lives was often about finding a man and being incomplete without having that male counterpart or that relationship. What we’re focusing on is that individual aspect of what it is that we’re creating for ourselves as women and showcasing the men as complements to our lives, not the main component of it.”

That’s not to say that “Run the World” is without its share of boy drama. Ella rekindles a romance with an ex. Whitney is planning her wedding. Sondi carries on an illicit affair. And Renee finds herself back out on the market amid a divorce.

But the show — and its women — know there’s more to life than men. They have careers, family and, most importantly, each other. The four friends fight and disagree, but at the end of the day, they always come back to each other, because that’s what real friends do.

These are simple money moves any normal, nonmillionaire person can make today.

“I can fight with my best friend but she’s still going to be my best friend because there’s so much love underneath there,” Amber Stevens West, who plays Whitney, told The News.

“We are going to call each other out because we expect each other to be excellent at all times. If you are making a huge mistake, I’ll call you out for being shady, but it’s only because I love you and I want you to be better. And I’ll accept that criticism from my friend too.”

Like “Sex and the City” called Manhattan home, “Run the World” plants its roots in Harlem, at Marcus Garvey Park and the Red Rooster and Yatenga. “A love letter to Harlem,” Bresha Webb, who plays Renee, called the show.

“Harlem...has a completely different heartbeat,” Corbin Reid, who plays Sondi, told The News. “Having lived in New York, each borough has its own personality and its own lifeline. Harlem has a very different identity than Manhattan...it was cool to just let her shine.”

And much like “Sex and the City,” “Run the World” exists specifically in its era, hitting the language and references of exactly this moment in history. That may not age well, but as a time capsule, it understands its place.

Showrunner Leigh Davenport pulled parts of her own experiences to make the show, focusing on the intersection of personal and professional for Black women in the 21st century.

SAN JOSE, Calif. — The Bay Area has become more racially segregated since 1990, mirroring a long-running national trend of cities and neighborhoods dividing more starkly along ethnic lines, according to a new study by UC...Read More

AUSTIN, Texas — In the early morning hours of Jan. 5, off-duty Austin police officer Gabriel Gutierrez faced a split-second decision when he claimed 27-year-old Alex Gonzales Jr. pointed a gun at him in a moment of road ...Read More

WASHINGTON — The U.S. Navy has swapped more than 1,600 parts among its new Virginia-class submarines since 2013 to ease maintenance bottlenecks as components that are supposed to last 33 years wear out decades sooner.

Police responded just after 8 p.m. to the 4000 block of Sullivan Avenue...Read More