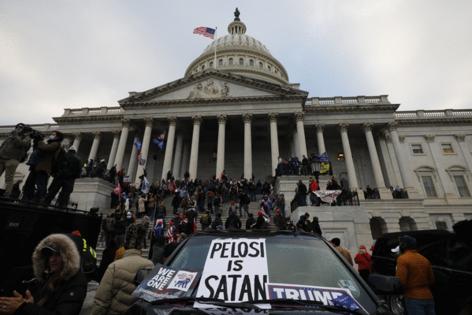 Two downstate Illinois men charged with breaching the U.S. Capitol on Jan. 6 said they were there to “tour” the historic site and went out of their way to avoid the violence, even stopping to ask a cop for directions to the nearest bathroom.

Douglas Wangler, 53, and Bruce Harrison, 58, both of the Danville area, were charged in a criminal complaint unsealed in U.S. District Court in Urbana on Friday with entering a restricted building and disorderly conduct on Capitol grounds.

A judge released both men on their own recognizance with orders to appear on the charges in Washington, court records show.

At least eight Illinoisans have now been federally charged as part of the ongoing investigation into the Capitol attack, which prosecutors have described as one of the largest criminal investigations in American history.

According to the complaint filed last week, Wangler and Harrison decided at the last minute to drive to Washington to attend President Donald Trump’s rally decrying the legislature’s vote to certify the Electoral College results from the 2020 presidential election.

Wangler told the FBI in an interview last month that as they walked to the Capitol building after Trump’s speech, he heard several loud bangs that sounded to him like a “civil war re-enactment” and saw protesters fighting with police and trying to breach barricades surrounding the building.

The friends avoided the violence by walking around to the other side of the building, according to Wangler’s interview. He told the FBI that as they were walking, “he saw a man pounding on one of the building’s windows and he told the man to ‘knock that (expletive) off,’” the complaint stated.

Eventually they entered the Capitol through an open door that had broken-out windows on either side, according to the complaint. Multiple images from the scene showed Harrison and Wangler roaming around the Capitol Crypt, taking photos and video by a white marble sculpture of John Stark and a bust of Abraham Lincoln, the complaint stated.

At one point, Wangler said he asked a police officer if they were going to get in trouble for being inside the building. According to Wangler, “the officer shrugged and said something to the effect of, ‘It doesn’t matter now,’” the complaint stated.

Harrison, meanwhile, told the FBI that while they were in the Capitol he asked another officer where the nearest restrooms were located. The officer “pointed in a certain direction” but the friends were not able to reach the bathroom “because that area of the building had been blocked off,” according to the complaint.

Harrison told the FBI they decided to leave after about 15 minutes because they had gotten “caught up in the moment” and realized they should probably not be inside, the complaint stated. They took a taxi back to their hotel and drove back to Illinois the next day.

The FBI later identified Wangler and Harrison from tipsters and the distinctive clothing they were seen wearing in surveillance images, including Harrison’s red, white and blue New England Patriots jacket, which he said he’d chosen because of its patriotic colors, the complaint stated.

A friend of the men interviewed by the FBI said Wangler had confided that he and Harrison had “walked around for a little while inside the U.S. Capitol building to take a ‘tour’ of some of the sights and then left,” according to the complaint.

The friend told the FBI that Wangler also said, “If walking around and singing some patriotic songs is a crime then I guess I am guilty.”

An attorney for the men did not immediately return calls seeking comment on Monday.

Both Wangler and Harrison are scheduled to have an initial appearance in U.S. District Court in Washington on May 28.

The message from Big Bend Regional Medical Center was stark: The only hospital in a sparsely populated region of far West Texas notified local physicians last month that because of a nursing shortage its labor and delivery...Read More

NEW YORK — Anyone who wants to dine, drink, exercise or enjoy a live performance indoors in New York City will soon have to show proof of coronavirus vaccination or be denied entry, Mayor Bill de Blasio announced Tuesday...Read More

MINNEAPOLIS — A judge sentenced a Lino Lakes man to probation and stripped his right to vote for five years for attacking a couple holding a sign critical of former President Donald Trump on a White Bear Lake street ...Read More

The number of officers who have died by suicide in wake of their response to the January insurrection at the U.S. Capitol doubled late Monday, with the Metropolitan Police Department in the District of Columbia confirming ...Read More

North Korea’s Kim Jong Un has appeared in recent days with a bandage about the size of a few postage stamps on the back of his head, in the latest episode to stoke speculation about the reclusive leader’s health.

LOS ANGELES — David Ordaz Jr. stood on the sidewalk outside his East Los Angeles home as sheriff’s deputies, as well as family members, yelled at him to drop a 12-inch kitchen knife.