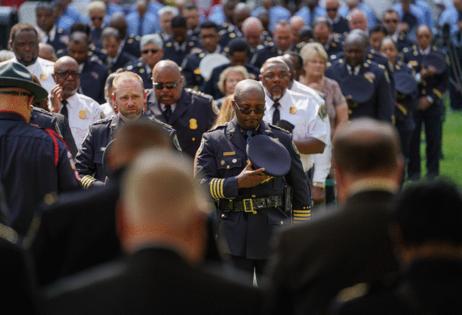 Detroit — The city's new interim police chief, a licensed mental health therapist with a civil rights background, vowed Monday to use those skills as he assumes command of the police department in one of the nation's most violent cities.

James White, who left the police department in August to become director of the Michigan Department of Civil Rights, is scheduled to begin his tenure in the $200,000-a-year job at the Detroit Police Department on June 1, when current Chief James Craig plans to retire.

Craig, whose nearly eight years as chief make him the second-longest serving top cop in Detroit's history, is planning a gubernatorial run as a Republican.

Detroit Mayor Mike Duggan made White's announcement Monday after consulting with the Board of Police Commissioners, who are responsible for giving him a list of candidates from which to choose a permanent chief.

White said his top priorities will be fighting crime, with a particular focus on speeding, "drifting" and other traffic violations.

"We've got to get this crime under control," he said during a Monday press conference at Public Safety Headquarters. "We've been talking about going heavy on traffic enforcement. ... The way we've been driving in this city has to stop."

White also vowed to balance the need to uphold the law with citizens' rights.

"The crime plan we're working on will be sensitive to our community, but it'll also be aggressive to those who commit crimes," he said. "People have the right to walk down the street."

White in 2013 spearheaded a renewed push to get the police department in compliance with federal mandates after it had spent more than a decade mired in three federal consent decrees. Within a year of Craig's appointment of White to head the new compliance effort, the consent decrees were lifted.