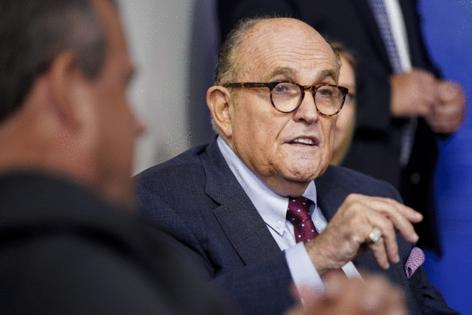 NEW YORK — Manhattan federal prosecutors are treating Rudy Giuliani as if he were “the head of a drug cartel or a terrorist,” the former New York mayor's attorney complained in a newly unsealed letter over the FBI raid of his apartment and law office.

Giuliani attorney Robert Costello wrote that a review of materials seized during the raids on April 28 cannot begin until he has more information on the feds’ secret seizure of his client's iCloud account in November 2019. Costello argues that much of the information is off-limits to prosecutors in the Southern District of New York due to attorney-client privilege. Giuliani represented former President Donald Trump, among many other high-profile clients.

“SDNY simply chose to treat a distinguished lawyer as if he was the head of a drug cartel or a terrorist, in order to create maximum prejudicial coverage of both Giuliani, and his most well-known client — the former President of the United States,” Costello wrote.

Prosecutors are investigating whether Giuliani violated foreign lobbying laws by acting on behalf of Ukrainian interests without proper disclosure.

The feds have asked for Judge Paul Oetken to appoint a “special master” to oversee the review of Giuliani’s materials for attorney-client privilege. A former federal judge served as special master for the review of materials seized from Michael Cohen’s law office in 2018.

But Costello said the Southern District failed to follow that protocol for Giuliani’s iCloud account. Instead, prosecutors withheld information on that search from Giuliani for 18 months.

“The search of an attorney’s office should be done rarely and only under extraordinary circumstances. Otherwise, such high profile and heavily publicized searches such as those of President Trump’s attorneys will just continue to erode and finally extinguish citizen reliance that communications for legal advice are really seriously protected,” Costello wrote.