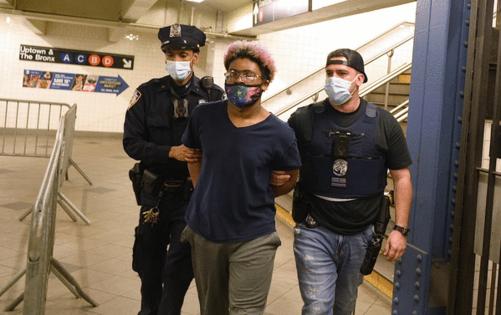 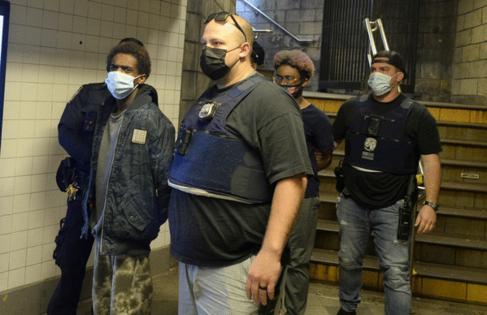 NEW YORK — One of the victims of a subway stabbing spree lost his eye in the attack — and the teenage suspects staged the early morning rampage as a gang initiation, prosecutors said Sunday.

The gruesome details emerged in weekend court appearances for two of the three teens arrested in the Friday attacks, which left five victims bloodied and battered in lower Manhattan.

Taquarious Soto-Burgos, 19, Joseph Foster, 18, and a 16-year-old boy were charged with robbery and weapons possession in connection with the pre-dawn violence. A fourth suspect remained at large.

“The People have information that the defendant’s violent crime spree on innocent New Yorkers was part of a gang initiation,” said Assistant District Attorney Katherine Byrns at the 16-year-old suspect’s arraignment early on Sunday. His name is being withheld because of his age.

The violence started at 4:20 a.m., when the underage suspect demanded money from a 44-year-old man on a downtown No. 4 train approaching the Union Square station and sliced his face, while Soto-Burgos urged him on by yelling “Do it again!” prosecutors alleged.

The victim escaped, but the teens turned on other passengers, viciously punching a 41-year-old man in the face and slicing a 40-year-old man’s nose open as the subway neared Astor Place.

Those victims fled, and the teens stayed on board to terrorize yet another victim, a 44-year-old man, demanding his money and his cellphone and slashing his head when he resisted, prosecutors said. That victim also escaped.

The teens switched to an uptown D train, where they tried to rob a sleeping 48-year-old man of his backpack.

He fought back, and the 16-year-old suspect stabbed him in his left eye, according to the complaint.

“As a result of the defendant ‘s brazen conduct, the (victim) lost one of his eyes,” Byrns said.

The three suspects, along with a fourth person, were arrested when they were spotted sleeping on an uptown No. 1 train at about 10 a.m. by NYPD Officer Steven Wody. The three were charged, but not the fourth person taken into custody with them.

Foster, who had the stolen backpack, told Wody, “The knife is in the bag. I’ll tell you everything,” according to the criminal complaint. The cop found a bloody knife inside.

The 16-year-old admitted that before the attacks, he had fled from a group home in Brooklyn, Byrns said. The teen also initially lied to police, giving them a fake name and age, she said.

Three other people were considered to be OK following the crash near Swim Beach at Chatfield ...Read More

ORLANDO, Fla. — Tropical depression Claudette, the third named storm of the year, is moving toward the east-northeast and should continue to move across the southeast region of the United States with heavy rain and ...Read More