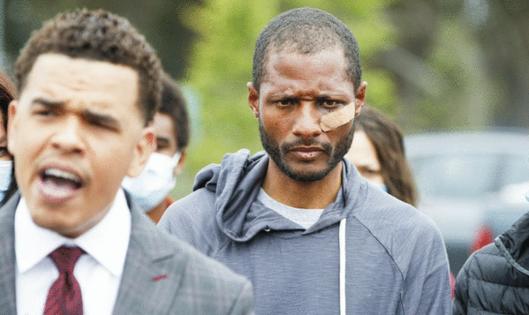 SAN DIEGO — His left eye still swollen and a bandage covering stitches on his cheek, the homeless man who was seen in a video being punched in his face, head and leg by two San Diego police officers who tackled him to the ground earlier this week spoke in public for the first time during a Friday morning news conference in La Jolla.

"First of all I want to say I forgive those officers and anybody in my life who's ever done me wrong," said Jesse Evans, 34, near the intersection of La Jolla Village Drive and La Jolla Scenic Drive, where the incident happened Wednesday morning.

Recalling the moments that led to the confrontation with several officers, Evans said he had unclasped his pants to urinate while standing near some trees on the southwest corner of the intersection when an officer approached and warned him to stop because he could be cited for indecent exposure.

Evans said he walked away, but an officer blocked him when he tried to cross the street heading east. He recalled that he swore at the officer, told him to get out of his way, and said, "This is why I hate this country. I hate this culture."

Video shot by a witness starts off showing one officer holding one of Evans' arms and the other pointing what appears to be a stun gun at him. The officer holsters his stun gun and then wraps his arms around Evans' chest. The two officers and Evans then struggle on their feet for several seconds before the officers wrestle him to the ground.

Once on the ground, the officers struggle with Evans while shouting commands for him to stop resisting. The officers can be seen striking Evans in his head and face and punching his left leg several times.

At the news conference, the Rev. Shane Harris, president of the People's Association of Justice, suggested racism was involved in the confrontation with Evans, who is Black.

"I saw on video what everybody saw," Harris said. "A Black man being brutalized, being treated like he wasn't a human. Being treated unjustly, all because he was allegedly urinating.

"What we are looking at today is urinating while Black," he said.