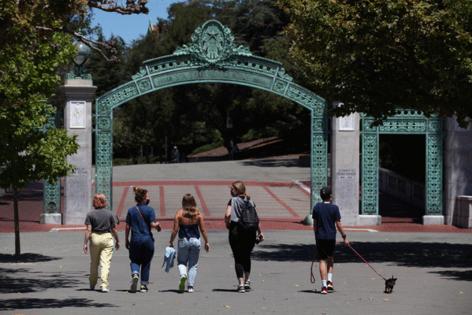 The University of California system agreed Friday to extend its court-mandated policy of test-free admissions through 2025, according to advocacy groups that argue the use of SAT and ACT scores discriminates against applicants based on race, income, and disability.

The university regents previously announced a test-optional policy while the system created a new type of test that it said will better align with the content it expects students to master.

Some campuses opted to immediately eliminate the use of test scores, while others decided to phase them out.

Students and groups sued the university in 2020, alleging the test-optional policy denies applicants with disabilities access to the benefit of the plus-factor that test scores provide, in part because they haven’t taken the tests and won’t be able to take them with necessary accommodations during the pandemic.

The Alameda County Superior Court granted a preliminary injunction in August, noting the pandemic restrictions were particularly difficult on people with disabilities. The order blocked schools from considering standardized test scores while the lawsuit was pending, preventing their use for the fall 2021 admissions process.

The settlement extends that policy. SAT and ACT scores, if submitted by students, won’t be provided to admissions readers, the settlement says.

It also “ensures that the University will not revert to its planned use of the SAT and ACT — which its own Regents have admitted are racist metrics — and that the University’s doors will remain open to the students who stand to benefit the most from public higher education,” Public Counsel attorney Amanda Savage said in a statement.

Existing UC policy allows students previously denied admission to any UC campus to present information related to a disability, if they believe it’s relevant to their appeal, the settlement says. And if the university creates a new exam, it will consider access for students with disabilities in its design and implementation.

In January, the UC system announced applicant data for the fall 2021 admissions cycle, which indicated its campuses received higher numbers of applicants from first-generation students, Black students, and Latino students than ever before.

“The makeup of this year’s applicants already show that students are no longer deterred from applying based on their inability to access standardized testing,” Potomac Law Group attorney Marci Lerner Miller, who represented the plaintiffs. “We’re confident that this settlement will lead to students demonstrating their abilities, rather than their disabilities, in the application process. We’re very proud of the students and organizations that bravely came forward to fight this battle, this victory belongs to them.”

The University of California strongly disagreed with the superior court’s decision to grant an injunction, it told Bloomberg Law in response to a request for comment. It filed an appeal at that time, and also began exploring the possibility of a settlement “that would provide certainty for students and their families, counselors, and high schools.” The UC Board of Regents approved the settlement May 13.