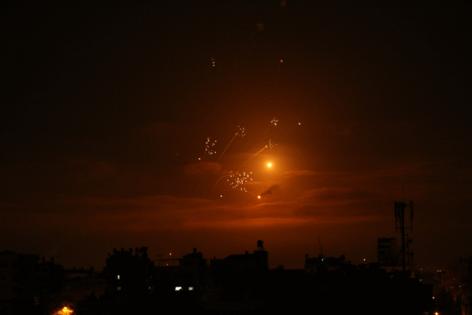 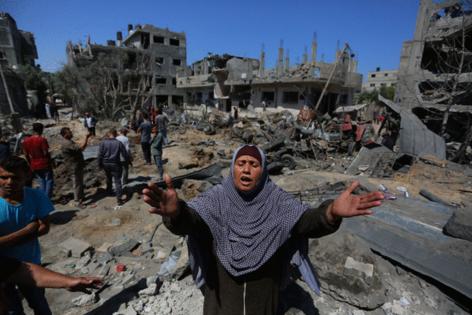 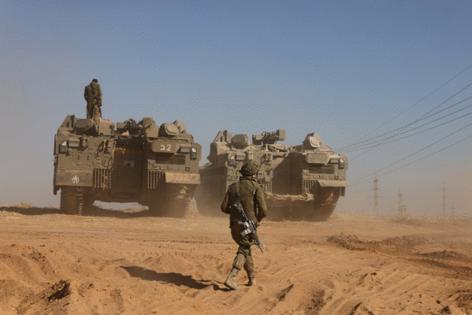 GAZA CITY, Gaza Strip — Israel intensified its attacks on the northern part of the Gaza Strip early Friday, spurring hundreds of residents in the densely packed territory to flee their homes amid fears of a ground incursion.

The Israeli military announced a ground and air assault on northern Gaza, amassing troops along the Israel-Gaza border and pounding the area with artillery and airstrikes. But it has so far refrained from entering the enclave, from which Palestinian militants have fired hundreds of rockets into Israel.

“There were dozens of artillery shells falling on our house,” said Khouloud Nasser, 40, of the northern Gazan town of Beit Lahiya, who escaped from her home along with dozens of family members at dawn Friday. “We would have died under the rubble if we stayed there.”

The stepped-up campaign came several days into an eruption of violence that has seen Israel square off against the Islamic militant group Hamas — which controls the Gaza Strip — as well as contend with rising civil unrest domestically between its Jewish and Arab citizens.

Hundreds of Israeli strikes on Gaza this week have left 119 people dead, 31 of them children, and 830 wounded, according to figures from Gaza health authorities. Israel has suffered seven fatalities, including a soldier and a child, from rockets launched by Hamas and Islamic Jihad militants. Dozens of civilians have been injured.

The Israeli military says 1,800 rockets have been fired at Israel, about a quarter of which fell short in Gaza or malfunctioned.

Israel’s pummeling of northern Gaza from both the air and the ground Friday pushed hundreds of residents to escape, many of them carrying what few belongings they could shove into shopping bags and laundry baskets.

“We’re civilians,” said Nasser, who with her family headed to Gaza City, hoping to find shelter in one of the schools run by the United Nations. “There’s nowhere for us to go.”

Ibrahim Badran, 45, was running down the street, clutching a plastic bag he had stuffed with clothes for his children.

“The Israelis shelled the area indiscriminately. Many people are under the rubble now,” he said. “Ambulances can’t get there because of the firing, so it was too risky to stay.”