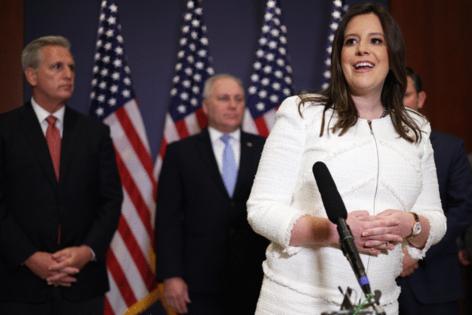 House Republicans installed upstate New York Rep. Elise Stefanik as their new third-in-command on Friday, awarding her for her absolute loyalty to former President Donald Trump as the party continues to remake itself in his image.

Convening behind closed doors in the basement of the U.S. Capitol, the Republicans voted 136-46 to make Stefanik their new conference chairwoman, a source confirmed to the Daily News, putting her in a highly visible role in party leadership that comes with responsibility over policy and messaging priorities.

The election was conducted by secret paper ballot. Still, the 46 no votes show Republicans are far from universally happy with Stefanik, who used to be one of the most moderate members of the House GOP before transforming herself into an ardent Trump booster during his first impeachment in 2019.

Stefanik, whose district spans from the outer suburbs of Albany to the Canadian border, was handpicked for the post by GOP leaders because of her willingness to amplify and defend Trump’s false claim that Democrats rigged the 2020 election against him.

She replaces Wyoming Rep. Liz Cheney, who was unceremoniously removed from the No. 3 post earlier this week in retaliation for her stern rebukes of Trump’s election lies and incitement of the Jan. 6 Capitol attack.

Trump, House Minority Leader Kevin McCarthy (R-Calif.) and other GOP brass endorsed Stefanik’s bid to become the next conference chairwoman, making her confirmation all but certain.

But Republicans, who have struggled to coalesce around one message or policy priority since Trump left office, are unlikely to quickly find unity.

Texas Rep. Chip Roy, a hard-right conservative, launched a last-minute bid to challenge Stefanik for the No. 3 spot, citing concerns about her moderate voting record, including opposition to Trump’s 2017 tax cuts and support for keeping the U.S. in the Paris climate accord.

Roy’s sentiment is shared by a small but vocal minority of House Republicans, especially among members of the ultra-conservative Freedom Caucus, as evinced by the 46 members who voted against Stefanik’s ascension.

Roy’s challenge was nonetheless easily rejected by the caucus during Friday’s closed-door meeting — an outcome that was expected as a majority of Republicans remain unlikely to do anything to cross Trump.

On his way into the meeting, Roy voiced displeasure with McCarthy for rushing through Stefanik’s candidacy.

“There’s a lot of hunger in the conference for slowing down, thinking through this, doing the right thing, making sure that we’re advancing the right policies in the right message,” he said.

Despite being a rock-ribbed conservative, Roy, unlike Stefanik, voted to uphold President Biden’s election in the aftermath of the Jan. 6 attack, angering Trump, who to this day continues to falsely insist that he won.

Stefanik’s rise in the party marks a culmination in her political transformation.

During the 2016 presidential campaign, she was a Trump critic who called his videotaped comments on sexually assaulting women “just wrong” and often avoided calling him by name.

But she refashioned herself politically during Trump’s second impeachment, making herself a key ally of the president and earning his support.

Still, Stefanik has remained one of the most moderate members of her caucus throughout her time in Congress, including voting with Trump less than 70% of the time in 2019 and 2020, according to CQ Vote Watch.