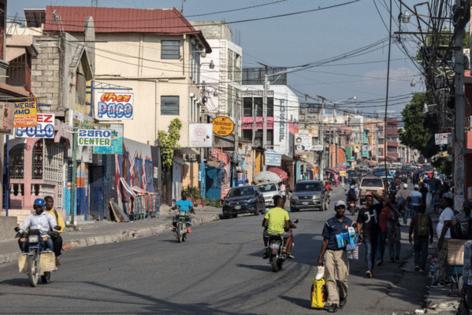 The United States Wednesday urged nations "to act quickly" in deciding on the composition and date of an Organization of American States mission to Haiti, which is under pressure to hold legislative, local and presidential elections this fall.

The U.S.'s plea came during a tension-filled meeting in which Haiti's representative to the hemispheric body accused the eastern Caribbean island of Antigua and Barbuda of attempting to destabilize Haiti and its ambassador of trying to serve his own personal agenda by highlighting the country's ongoing political and constitutional crisis.

Pointing out that it has been two months since the OAS Permanent Council offered to help Haiti break a debilitating political impasse, Bradley A. Freden, the U.S.'s interim representative to the OAS, said his delegation was "deeply concerned with security trends in Haiti, which have deteriorated in recent months.

"Humanitarian needs and human rights also remain pressing concerns for the United States," Freden said. "The United States strongly supports this mission and is willing to provide funding to ensure broad participation by members states from across the region."

In March, the OAS Permanent Council unanimously agreed to offer its assistance in facilitating a political dialogue between the government of Jovenel Moïse, members of the opposition and civil society — if the government extended an invitation for them to do so. On April 28, acting Haiti Prime Minister Claude Joseph wrote to OAS Secretary General Luis Almagro asking for a mission.

In the letter, Joseph said the hope was that the OAS mission would lead to a political agreement to help facilitate the organization of the constitutional referendum and elections later this year. The inclusion of the controversial referendum, which is scheduled for June 27, created concerns among some member states.

Antigua and Barbuda Ambassador Sir Ronald Sanders, who led the push for a mission with the March resolution, insisted that there should be no precondition for an OAS visit, and the referendum, which many Haitians insist is illegal, should not be on the table for discussion.

During Wednesday's OAS meeting, diplomats welcomed Haiti's request for the mission but expressed uncertainty over how best to proceed while concurring with the U.S. that they needed to act quickly.

Almagro said that at least 28 different political actors other than the Haitian government had been contacted about a possible Haiti mission and responded with interest. Who makes up the mission will be critical if the OAS, which hasn't had much success in Haiti in years past, is to have a chance at encouraging a constructive political dialogue among all parties in Haiti in hopes of paving the way for legislative and presidential elections.