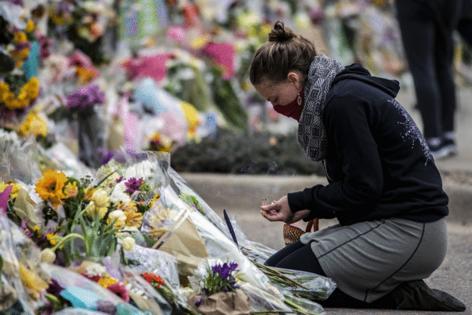 The store has remained closed since the March 22 shooting that killed 10 people. But in late April, survivors and families of victims had an opportunity to go into the store if they chose to help with healing.

Employees of the store will receive emergency pay through June 19.

King Soopers recently donated the groceries that have sat in the empty store to Community Food Share in Louisville.

Employees, shoppers and a Boulder police officer were among those killed. Wednesday’s press conference took place across Table Mesa Drive from the memorial that sprang up along the temporary fence around the store, hung with now-withered flowers and weather-beaten signs holding messages of remembrance, prayer and pleas for gun regulations.

Mayor Sam Weaver said the Museum of Boulder will collect items from the memorial for preservation. Interim City Manager Chris Meschuk said discussions are ongoing about a permanent memorial, but said he expects the process will take several years and did not have details about cost and potential location.

The 22-year-old suspect arrested in the incident faces more than 50 charges including first-degree murder, attempted murder and possession of banned high-capacity magazines during the commission of felonies in connection with the shooting. His case has a status conference set for May 25.