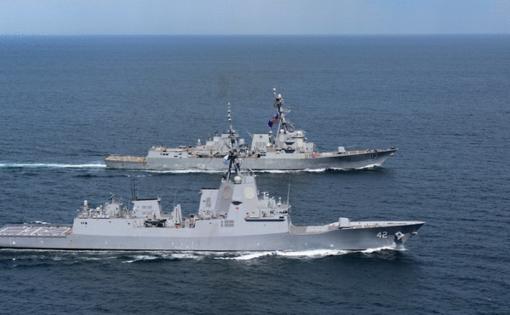 The largest carcass belonged to a female adult measuring 65 feet long, according to National Oceanic and Atmospheric Administration. The other was much smaller at 25 feet long, likely a calf.

The whales were discovered as the ship, HMAS Sydney, berthed at Naval Base San Diego, the Australian Royal Navy said in a statement.

Experts say the physics of the situation are somewhat common — even if the presence of more than one whale makes this scenario rare.

Large vessels frequently strike fin whales inadvertently and unknowingly, and the dead whale remains wrapped around the bow, held in place by pressure as the boat moves forward.

“Often times, (mariners) don’t know until they come in and stop,” said Justin Viezbicke, coordinator of NOAA’s California Marine Mammal Stranding Network. “That’s when the whale falls off and floats out.”

The Sydney, a Hobart-class guided missile destroyer, has been in Southern California-area waters since April conducting joint exercises with the U.S. Navy. At 481 feet long, the ship is slightly smaller than the U.S. Navy’s Arleigh Burke-class destroyers.

It is the ship’s first deployment after being commissioned last May. Specifically, the Sydney is conducting Combat System Sea Qualification Trials on its Aegis Weapons System, which will allow the ship to integrate with allied forces in future missions, according to a news release from the U.S. 3rd Fleet.