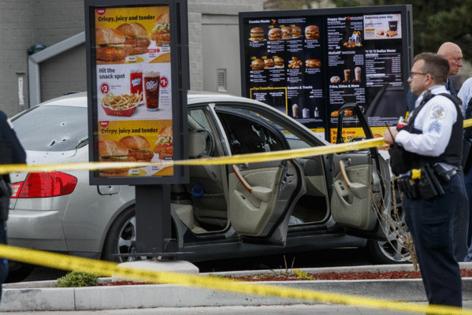 Devontay Anderson, 21, was charged in a criminal complaint filed in U.S. District Court on April 29 with unlawful flight to avoid prosecution in Jaslyn’s killing.

Anderson was one of three men believed to be involved in the April 18 attack at the McDonald’s at 3200 W. Roosevelt Road that left Jaslyn dead and her father seriously wounded, according to the federal complaint unsealed Wednesday.

Two others, Marion Lewis, 18, and Demond Goudy, 21, were previously arrested on murder charges and have been ordered held without bond, records show.

After Anderson was identified as one of the alleged gunmen, Chicago police obtained a warrant to track the GPS information on a Facebook profile he was associated with, according to the complaint. Beginning on April 26, “pings” from the Facebook account placed whoever was using it in the area of Miami, Florida, the complaint stated.

In a motion to unseal the complaint filed Wednesday, prosecutors said making the charges public would no longer jeopardize the investigation but did not elaborate.

A law enforcement source said Anderson was not in custody as of Wednesday afternoon.

Jaslyn’s slaying in broad daylight shocked West Side residents and led to vigils and calls to curb gun violence that has long plagued the city.

According to the federal charges, the girl was in the back seat of an Infiniti sedan being driven by her father when surveillance video showed a 2017 Audi S8 pull up to them in the drive-thru and two adult males exit.

One man, later identified as Anderson, got out of the rear passenger side of the Audi brandishing a Draco AK-47 pistol, while the other male exited from the front passenger seat holding a Glock pistol, according to the complaint. Both gunmen opened fire on the Infiniti, firing dozens of rounds before reentering the Audi and leaving the scene.

Cook County prosecutors have said in court that police found a total of 47 casings from two guns at the scene.

Lewis was arrested two days after the murder after he fled from police and then tried to carjack a family with two young children on the Eisenhower Expressway before he was shot and wounded by Chicago police officers, according to prosecutors.

Goudy, who was out on bond on four separate felonies at the time of the slaying, was arrested about a week after Lewis.