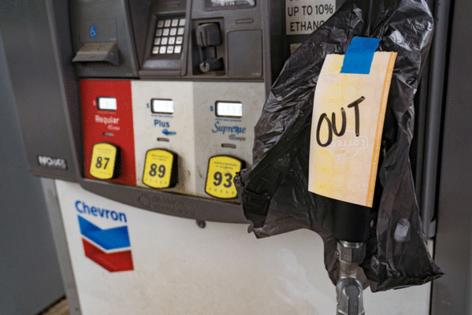 The average national gas price on Wednesday hit $3 per gallon for the first time since 2014.

Costs have been on the rise since a cyberattack over the weekend forced Colonial Pipeline to temporarily shut down operations. The pipeline delivers nearly half of all fuel along the East Coast.

"Areas including Mississippi, Tennessee and the east coast from Georgia into Delaware are most likely to experience limited fuel availability and price increases, as early as this week," AAA spokesperson Jeanette McGee said Tuesday in a news release. "These states may see prices increase three to seven cents this week."

As of Wednesday, Americans were paying just over $3 a gallon on average for regular gas. That's up from $2.985 the day before and $2.863 the previous month, AAA said.

It's the first time since October 2014 that the United States' average topped $3 a gallon, Patrick De Haan, an analyst for GasBuddy, wrote on Twitter.

At this time last year, the national average was $1.854. But oil production cuts and higher demand for gas in a recovering economy have been pushing prices higher in recent months, McClatchy News reported in March.

But fuel experts warn against rushing to buy gas. Economists have said there isn't currently a shortage caused solely by the Colonial Pipeline shutdown, which would have to last multiple days before there's a major impact, McClatchy News reported.

Morgan Dean, a spokesperson for AAA, told CBS News that anxious motorists should think twice before filling up their tanks.

"Panic buying of gas right now will create this artificial demand that will make all of this worse," Dean said.

"Reminder to motorists in Colonial's operating area: rushing out and filling your tank will make the problem much much more acute and likely double or triple the length of any supply event, if it comes to that," De Haan said on Twitter.

As of Monday, Colonial Pipeline said it had a "goal of substantially restoring operational service by the end of the week." It has since reported making some lines operational.