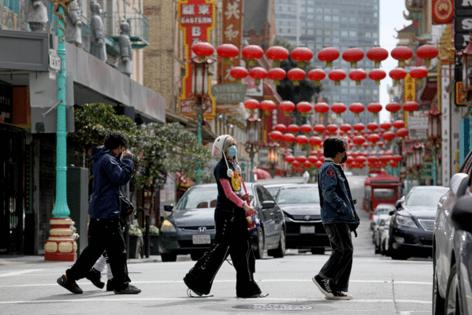 SAN JOSE, Calif. — Across the Bay Area, vaccinated people are venturing onto breezy restaurant patios, visiting with small groups of inoculated friends and hitting hiking trails unmasked. The science says the risk of getting or transmitting the coronavirus in such scenarios is very low.

But there’s another group of residents who, even after more than a year of social distancing and mask wearing, aren’t quite ready to give up their pandemic ways.

Health experts say that’s not unexpected. People were told for months to protect themselves from the virus, and they’re going to need time to re-emerge as the threat recedes. If the idea of going back to the office or removing your mask makes you nervous, that’s not an unnatural reaction.

“A lot of the things we do are habitual, and it becomes the thing you do,” said Ellen Evers, a University of California, Berkeley professor who studies emotions, judgment and decision making. “If for a year the thing you do is put on a mask, you probably don’t even give it a second thought.”

Even health professionals have different opinions about the best way to begin shifting behavior.

Monica Gandhi, a UCSF infectious disease expert, encourages people to take small steps toward some semblance of normal, noting that social interaction is good for our mental health.

“I know it’s hard to shake the fear,” Gandhi said. “Dip your toes in the water.”

Gandhi’s Twitter feed is full of scientific studies and analysis showing that not only are fully vaccinated people well protected against the virus but that they are also highly unlikely to pass it along to others. She’s chosen to unmask outside in part to “model the effectiveness” of the vaccines. In response, she’s been called an anti-masker, even though she endorsed mask wearing wholeheartedly before the vaccines became available and when transmission rates were very high.

But Gandhi thinks the current messaging from public health officials and policymakers has been muddled. President Joe Biden and California Gov. Gavin Newsom, for instance, are still wearing masks in uncrowded outdoor settings.

“That’s part of the problem,” she said. “I think that’s confusing for the public.”