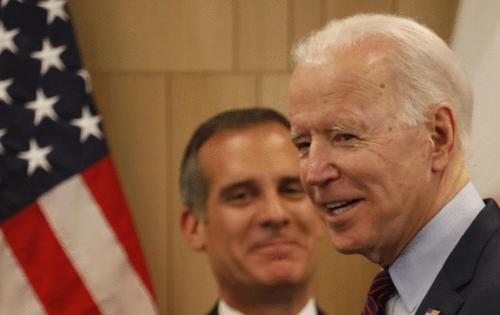 With Mayor Eric Garcetti again in the running for a post in the Biden administration — this time as U.S. ambassador to India — politicians, bureaucrats, activists and others are trying to figure out what a mayoral departure would mean for the city and its most pressing issues.

An early exit could reshuffle the race to replace Garcetti in next year’s election. And it would likely trigger another, behind-the-scenes competition for the post of interim mayor — a choice that would be up to the City Council.

“It’s going to have a ripple effect,” said Loyola Law School professor Jessica Levinson, “not just in terms of who Garcetti’s successor would be but how that would affect the race for mayor, who on Garcetti’s staff stays and goes and, perhaps most importantly, what happens to the mayor’s initiatives and goals.”

A White House official confirmed to the Los Angeles Times that Garcetti is on the short list for the overseas post. President Joe Biden’s next batch of ambassador nominees is coming “soon,” a press secretary said earlier this week.

The Garcetti waiting game has injected a new source of volatility into a government that was just finding stability after a year of upheaval caused by the COVID-19 pandemic. Angelenos have been getting vaccinated in large numbers, and a massive infusion of federal funds recently pulled the city back from the financial brink.

Plenty of big issues remain. Activists who are determined to address police brutality are pressing city leaders to shift funds away from the Los Angeles Police Department to social services. A federal judge overseeing a massive case on the city and L.A. County’s handling of homelessness recently ordered officials to offer shelter or housing to everyone on skid row by the middle of October — a move the city is fighting in court.

With Garcetti potentially on his way out, some of the most difficult decisions could easily be put off, said political consultant Eric Hacopian.

“It’s a destabilizing thing until he clarifies that he’s going or not going,” he said.

Garcetti, whose term ends in December 2022, was an early supporter of Biden in last year’s presidential race, serving as a co-chair of his campaign committee. Five months ago, Garcetti announced that he had decided not to take an unspecified job in the administration, saying there was “no task more urgent” than remaining as mayor during the peak of the pandemic.