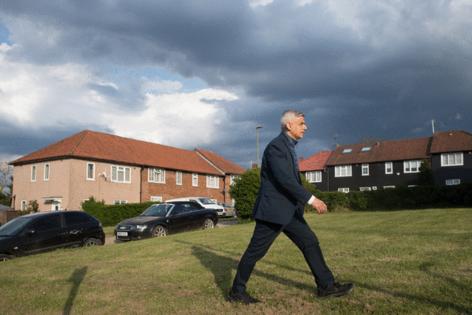 LONDON — Sadiq Khan was re-elected as Mayor of London but only after an unexpected surge in support for his main rival threatened to give Boris Johnson’s Conservatives their biggest prize of this week’s British elections.

As the incumbent Labour Party candidate, Khan was the runaway favorite to win the contest and keep his job but Shaun Bailey ran a closer-than-expected second, narrowing the gap in the polls in the final days of the contest.

“I’m proud to have won an overwhelming mandate today,” Khan said after the result was announced. But London is “deeply divided,” he said, with the scars of Brexit “yet to heal” and “economic inequality” getting worse.

The result will be a relief rather than a source of jubilation for the U.K.’s main opposition party after a set of results across the country that its own leader described as bitterly disappointing.

Khan won his first term in 2016, becoming the capital’s first Muslim mayor. His predecessor, Johnson himself, had stepped down to focus on a political career that eventually saw him become prime minister.

As mayor, Khan has power over transport policy including fares on London’s bus and subway system, local taxes, and policing. He will set targets for housing and building projects and acts as a corporate hub. In the run-up to the vote, Khan promised to be the most pro-business mayor the city has ever seen. That is the kind of messaging to appeal traditional Tory voters.

Khan, 50, is one of eight children born to Pakistani immigrants and lived in a deprived neighborhood of south London. Since becoming mayor he has been a vocal critic of Johnson’s government, notably over Brexit, and has clashed repeatedly over how to pay for the subway service that has been struggling financially.