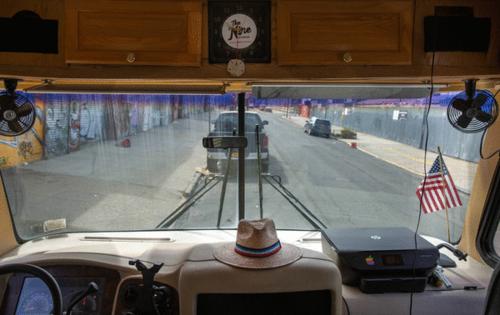 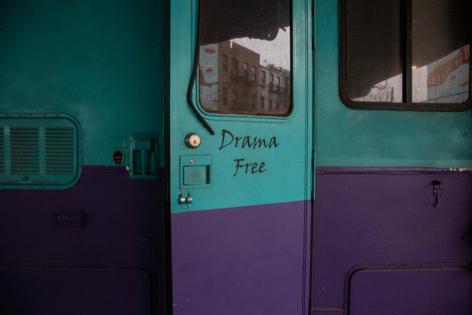 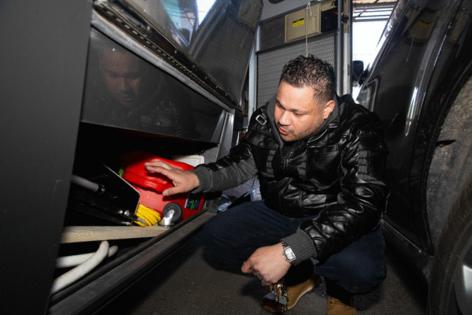 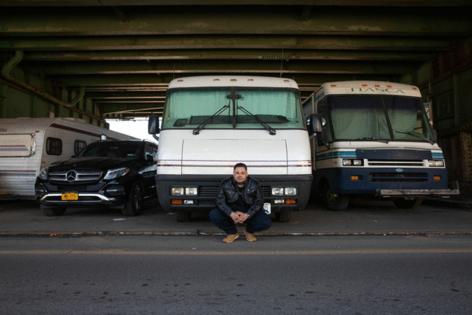 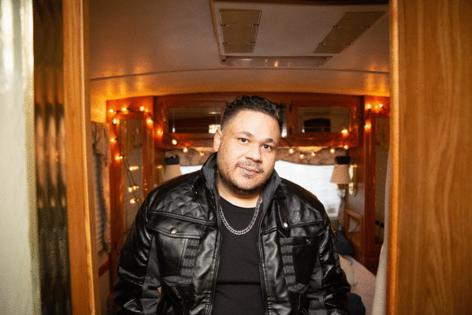 NEW YORK – Inside a bright purple RV tucked under the Brooklyn Queens Expressway, Giovanni sat in the orange glow of a heater screwed onto a propane tank. A sticker on the front door read, "Drama Free Zone." Emails chimed on his work laptop in the background.

“I would not have been doing it this way unless I had to,” said Giovanni, 32, who lives in a recreational vehicle. “If I kept going the way things were going, I was probably going to be in a real jam, where I wasn’t going to be able to pay rent, probably evicted and couch surfing.”

Giovanni is one of dozens of New Yorkers who have traded a brick-and-mortar pad for a home on wheels because they can’t afford city rents.

As a first responder — an emergency medical technician with a private hospital — Giovanni said he couldn’t make ends meet.

“I was an EMT… you want to talk struggling‚ that was really rough,” he explained. “I had to have somebody rent out my living room just to be able to cover the rent. That’s how hard it was. After doing that for three, four years, I was like, I’m done with this. I quit. I’m over it.”

In December 2019, Giovanni bought a Fleetwood Southwind RV for $4,000 and decided to call it home.

By the light of a small, solar powered lamp, Giovanni, who asked that his last name be withheld, now sells insurance using his cell phone as a hotspot. He said his $40,000 a year salary is still not enough cash to rent an apartment in most neighborhoods, so he delivers food on the side.

“I went to college, I did pretty much everything that I was told I was supposed to do in order to have a good life. And it didn’t turn out that way,” he explained. “For a majority of us, we got slammed with student loans that are almost impossible to pay back. I’m probably one of two or three Millennials under that highway.”

The average monthly price for a rental property in Brooklyn rose from $1,840 in 2010 to $2,734 in March last year, according to a Street Easy report.

Brooklyn rentals were going for $2,463 a month in March, according to the real estate website.

“One of the characteristics of the pandemic vs. prepandemic has been a sharp drop in rent however it doesn’t appear it’s been enough of a decline to create affordability,” said said Jonathan Miller, President and CEO of Miller Samuel Inc., a real estate appraisal and consulting firm. “It is a real predicament.”

For New Yorkers like John Sanabria an RV offers the promise of the open road and the potential of settling down wherever he winds up.

“If I go to another state everything is cheap, there’s more freedom,” said Sanabria, 35. “New York, I feel like I don’t have freedom over here.”

Last summer, Sanabria dumped his savings into a 1998 Airstream Land Yacht. Once the floors are renovated with new tile, he plans to drive away and make a new start.

“When I went down to Florida, I slept better, everyone was nicer, I loved it,” he explained.

Until his RV is road ready, Sanabria works as a locksmith and lives in Sunset Park. He said he can’t afford to stay in the borough where he was born and raised because outsiders are moving in.

“There’s a lot of people come from other states. It’s changing New York. They call them yuppies, it’s better, the neighborhoods are cleaner, it’s improved,” said Sanabria. “But even people with college degrees have to work two jobs [to afford rent]... I feel abandoned.”

The NYPD said there are no regulations for RVs, only that they must obey street parking rules. The City Department of Environmental Protection had no information or guidelines for RVs, according to a spokesman. The State Department of Motor Vehicles did not respond to a request for the number of RVs registered within the five boroughs.

While living an in RV may sound attractive to people trying to save money and add a little adventure to their lives, it is not for everyone.

New York, unlike places like Jersey City, Chicago, San Diego and New Orleans, does not offer parking for the behemoths, places to hook up for access to electricity and water or spots to dump waste.

Because of that, living here in an RV can be challenging.

“It’s a little difficult just because New York is not really RV friendly,” said Kathy, who asked that her last name be withheld.

Kathy and her husband moved into their four-wheeled abode at the start of the pandemic because they didn’t want to get their elderly parents sick but couldn’t cough up any more money for rent.

Even though the living is not always easy, Giovanni tries to get as much mileage as he can out of it.

“I’ll go on dating websites, I even have it on my profile that I live in an RV, and some people are like, ‘Wow, that’s really cool.’ Other people just don’t say anything or just don’t talk to you,” he said. “It’s hit or miss really, but my friends don’t care.”