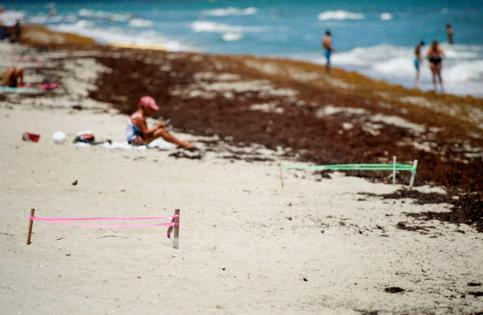 For more than a decade, unpaid guardians have watched over sea turtle nests in Broward County, rescuing thousands of hatchlings led astray by artificial lights.

Now the state wants to cut the number of volunteers as a step toward ejecting them completely from the beach. The state wildlife commission told three sea turtle rescue groups that their nighttime vigils are unnecessary and harmful, saying in a letter “the increased human presence on the beach at night during nesting and hatching season in effect endangers the health and safety of marine life.”

“They’re saying they would rather have dead sea turtle hatchlings in storm drains, parking lots and in the roadways, and dehydrated on the beaches, versus having our rescue staff, our volunteers on the beach,” said Richard WhiteCloud, founder and director of Sea Turtle Oversight Protection, which has more than 140 volunteers. “People who are out there doing the right thing are being punished.”

WhiteCloud promises a legal fight, and activists who volunteer to spend hours each night guarding the nests are unlikely to go quietly.

“I am absolutely going to go out and rescue these animals, whether it’s legal or not,” said Dr. Holly Wilson, a physician who has guarded nests for years. “We’re not getting a salary. We just want the turtles in the water. If this goes through, turtles are going to die.”

The fight is taking place over beaches used for thousands of years by female loggerhead, green and leatherback turtles. These behemoths, which weigh hundreds of pounds, crawl ashore at night, dig holes and deposit 100 or so golf-ball-sized eggs. When the eggs hatch, the baby turtles race toward the brightest light, an instinct that served them well when it drew them toward moonlight shining on the ocean.

But condo towers, hotels and restaurants generate lights that draw hatchlings inland, where they get run over, dry out, or end up easy prey for birds and raccoons. Although cities have restricted lighting during nesting season, violations occur, and even with compliance, the sea turtle groups say enough light shines over the beaches to disorient hatchlings.

During nesting season, which runs from March 1 to Oct. 31, volunteers watch nests that are about to hatch, prepared to gather wayward hatchlings in buckets and bring them to the ocean. Sea Turtle Oversight Protection has rescued more than 260,000 hatchlings since the group formed 14 years ago, WhiteCloud said.