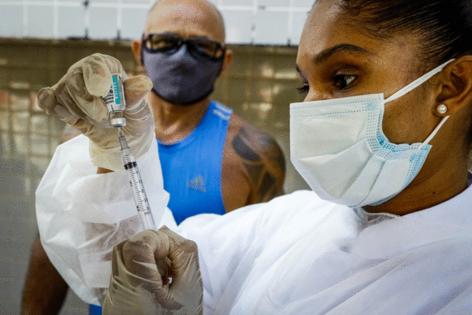 BRAZILIA, Brazil — It began with the elderly. When an Amazonian variant appeared, a broader range of Brazilians started dying. Then those in their 40s, 30s and even 20s succumbed. Now, in an even more chilling development — with possibly global implications — COVID-19 is killing pregnant and post-partum Brazilians, leaving newborn orphans.

As the disease’s toll on the young surges, overwhelming hospitals, roughly 500 such deaths have occurred in the first four months of this year, according to a group that monitors mothers and babies in Brazil. That’s more than the toll of the previous nine months: 30 a week, compared with 10.

“Brazil already had a structural problem with women’s reproductive health care,” said Debora Diniz, a researcher at Brown University in Rhode Island who has spent the past few months tracking COVID-19 and pregnancy in Brazil. “The pandemic overloaded the health system. There’s now a risk of a generation of orphans.”

The stages of Brazil’s battle with COVID-19 have often been a harbinger for the pandemic elsewhere. The emergence of a more contagious variant that’s now invading the rest of Latin America, a shift to the young such as that happening in the U.S. and the oxygen shortages that are plaguing India were all seen earlier in this nation of 212 million.

It could be the same for COVID-19 and pregnancy. A study published on Jama Pediatrics last month found that COVID-19 in pregnancy “was associated with consistent and substantial increases in severe maternal morbidity and mortality and neonatal complications,” especially if mothers have co-morbidities or present with symptomatic cases. The study, which involved 18 rich and poor countries, found that women who tested positive delivered earlier and had higher rates of pregnancy-induced hypertension.

The second wave of the virus hit Brazil hard as lax social distancing mixed with the new variant, sending transmission rates soaring. With a daily death toll that routinely tops 3,000, the pandemic has galloped past milestones of 200,000, 300,000 and now 400,000 dead, second only to the U.S. The mortality rate has surged to 4.5%, more than double that of last year, according to local research institution Fiocruz.

The warning came too late for Adriely Carneiro de Santana. She was 26 last year when she found out she’d be having a daughter. Novel coronavirus was new.

Adriely lived with her husband Fabio in the same house as her mother in Olinda, a city in the northeast. She’d had health battles before: chikungunya in 2017 and dengue in 2019, both mosquito-borne. So when coronavirus hit, she locked herself at home.

A month before her October due date, she was hospitalized with a urinary tract infection. Because of high blood pressure, doctors induced labor. The baby, Aylla Vitoria, was born healthy, but Adriely was weak and needed an ICU bed, which the hospital didn’t have. She was transferred and put in a room with other patients. Four days later, she had trouble breathing. She was transferred again, to a COVID-19 hospital where she was finally tested: positive. She died two weeks later, never having held her baby.